I love this world... but something has happened... there has been a change. It seems like I'm the only one who can see that humanity is broken. And the people with the powers to fix it don't know how.

Maxwell Lord is a spy and the former leader of Checkmate. With his modest telepathic powers and extreme cunningness, he has acted as a villain to both the Justice League and Wonder Woman.

Maxwell Lord IV was born to a wealthy businessman named Albert Lord and his wife Maxine in the town of Marblehead. From an early age Lord developed limited psionic powers which allowed him to persuade people into doing things they wouldn't normally do, however this process gave Lord frequent nose bleeds.

When Lord was a teenager, his father killed himself after he realized that the weight loss medical pills he made his fortune off of were giving people cancer. At his father's funeral Maxwell was told by his mother that his father was too compassionate and weak, as she would have covered the incident up instead of admitting to the problem. Maxine made her son swear to deprive people of power that he deemed unworthy at all costs. [2]

After his graduation from college, Maxwell joined Checkmate, a global peace-keeping organization, and quickly rose up the ranks until he obtained the second highest rank in the organization.[2]

On one occasion, Checkmate Headquarters was attacked by cultists of the demon Trigon. During the attack, Maxwell and one of the joint leaders of Checkmate Jason Cameron were pinned down alone by the monks. Seeing his opportunity to climb the corporate ladder, Lord "persuaded" Cameron to use several grenades to suicide bomb the cultists, ending the conflict.

In the aftermath of the skirmish with the cultists, Lord was promoted to one of the multiple leaders of Checkmate, though he immediately incriminated the other leaders to become the sole head of the organization.[2]

Formation of Justice League and A.R.G.U.S.

As the Black King and Director of Checkmate, Lord earned a reputation for not being able to work well with others and creating conflicts with other organizations. During the invasion of Earth by the alien conquerors of Apokolips, Lord managed to make his organization the exclusive police force in human-superhuman relations and was given full command of the military forces working against the aliens.

After the invaders were defeated by the newly formed Justice League, a new organization known as A.R.G.U.S. was formed to liaison with the League. The formation of this organization took a lot of power away from Lord and his organization, causing Lord to hold a grudge against the League from that point on for stalling his rise to power.[2] 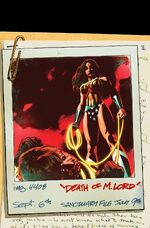 Due to fluctuations of the timeline, some events from a previous timeline were retroactively said to have happened in Lord's history.

At one point, Lord was killed by Wonder Woman for threatening metahumans, as he saw them as a danger to mankind.[3][4]

Lord was briefly revived as a Black Lantern during the Blackest Night[1] though, he would be revived completely by the White Life Entity during the crisis' climax.

Following his resurrection, Lord would resume his position as the head of Checkmate. 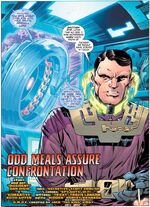 In the five years following the League's formation, Checkmate had gone international and was known as the Global Peace Agency. Lord, still its leader, became the and Executive Commissioner of the experimental OMAC Initiative. Having imprisoned the sentient satellite Brother Eye, Eye turned on Lord and began using OMAC to attack their Project Cadmus facilities.[5]

Lord sent a team of elite agents after OMAC, one led by Sarge Steel,[6] and another by an agent named Mokkari, but they were both unsuccessful.[7] Trying to get the operation under control, Lord called in S.H.A.D.E. to help deal with the threat, but even their agent Frankenstein couldn't stop OMAC.[8][9]

Brother Eye, fighting back, attempted to assassinate Lord with an employee of Kord Industries, and their conflict grew personal.[10] Max eventually destroyed Brother Eye by outsmarting him with magnetizing weaponry. Having neutralized the real threat, Lord determined that OMAC the person was harmless and let him go.[11]

Sometime later, Lord was imprisoned and interrogated by Amanda Waller for attacking one of her prison transfer trains. During his interrogation, Lord managed to use his mental powers to force Waller to tell him the location of The Catacombs Superhuman Prison in Death Valley, California, where Waller kept the most dangerous criminals from her Suicide Squad project. Lord then used his powers to manipulate his way out of Waller's compound and to his parents' graves, promising to take the undeserved power away from the League and Waller.[2]

Lord went to work locating The Catacombs Metahuman Prison. Once he found it, he freed the first Suicide Squad from their cells and convinced them to work for him in his plan to murder Waller. 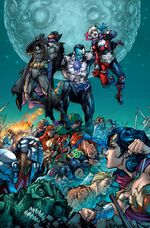 Lord and his new team infiltrated and slaughtered an island of shamans sworn to protect world-breaking secrets, revealing the location of the weapon he would use to fight the Justice League - the Heart of Darkness.[12]

Upon clashing with both the Justice League and the Suicide Squad, Lord revealed the artifact that he had stolen and unleashed it, giving him all the power of its entity Eclipso. Lord used his new power to eclipse the Justice League under his command.[13]

Lord used the mind-controlled Justice League to dominate the US capitol and moved into the White House, contemplating his next move. Lord had Superman bring Amanda Waller to him so she could he could brag about his victory, but Waller forced Lord to lose control of the Heart of Darkness and become completely possessed by the spirit of Eclipso.[14] Killer Frost managed to purge Eclipso's essence from Lord's body, finally ending the conflict, and the madman was taken into Waller's custody.

Lord later woke up inside a power-dampening jail cell and learned that his entire plan had been manipulated by Waller from the start. Every move he made was calculated by Waller ahead of time, even revealing the location of the first Suicide Squad, so that Waller's Squad would gain a better reputation with the Justice League. Lord, furious, was kept under Waller's control as she invited him to join a new Suicide Squad: Task Force XI.[15]

When Braniac abducted the heroes of Earth to have them fight the Omega Titans, Waller deployed Task Force XI - a team of all telepaths - to extract information from his brain. However, the psychic link was too overwhelming, and Brainiac died as a result.[16]

He was later transferred to a prison, where he was kept under constant surveillance, his brain activity was monitored and was made powerless with an inhibitor collar. His fellow prisoners started a riot that attracted the attention of Wonder Woman. He made a group of them stab each other when she confronted them and told her to be grateful since he had saved her. The United States Army arrived soon to imprison him again.[4][17][18]

He was allowed to be follow Diana along in helping her shut down a mobile app developed with proprietary technology of Lord's company, that was causing mass-hallucinations among the public and helped snap Wonder Woman out of her own hallucination, claiming to have changed after finding his battle against metahumans meaningless ever since the fall of the Source Wall.[19]

As he assisted the United States military to shut down the app and destroy the servers, he was granted release in exchange for his help. Max later helped Diana stop many incidents from turning tragic and when asked why he changed, he responded that he had seen his path would lead to his death. As they were traveling, their car was rammed by a military vehicle and he learnt that it was his own daughter Emma manipulating people.[18]

Emma was trying to impress Maxwell, giving him the means to kill Wonder Woman, but Lord decided to not side with her, instead helping Diana defeating her. At last, Emma was able to read in his mind, finding out what made him change his views: he had a vision while observing the Source Wall break, a vision depicting another version of himself getting his neck snapped by Wonder Woman.[20]

With the words of his newfound daughter on his mind, Lord started to think again about what he should do as the vision provoked by the Source Wall cannot leave his mind. Keeping his struggles for himself to not raise suspicions, Lord accepted the offer of the United States Army to get free on parole, becoming a resource for Etta Candy to deploy. Wonder Woman's unusual partnership with him however was not ending yet.[20]

Retrieved from "https://dc.fandom.com/wiki/Maxwell_Lord_IV_(Prime_Earth)?oldid=2809778"
Community content is available under CC-BY-SA unless otherwise noted.