This page contains information about Megatokyo (Volume 1) . Megatokyo is the collected edition of the pioneering English-language manga webcomic of the same name. 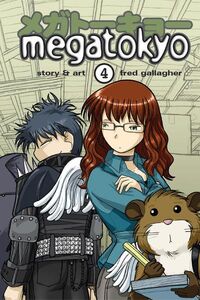 Megatokyo is the collected edition of the pioneering English-language manga webcomic of the same name.


The first volume was published by Studio Ironcat, before publishing shifted to Dark Horse for volumes 2-3 (and a revised version of volume 1). Following that, the series moved to DC's CMX imprint for volumes 4-5, and then volume 6 was published by Wildstorm following the dissolution of the CMX imprint. No new volumes have been published since volume 6 in 2010, despite the fact that the webcomic is still ongoing.

Retrieved from "https://dc.fandom.com/wiki/Megatokyo_Vol_1?oldid=1949997"
Community content is available under CC-BY-SA unless otherwise noted.