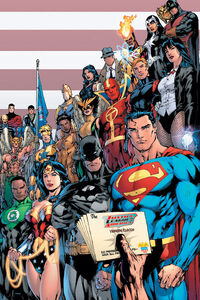 Thanks for your edit to the Tweedledum and Tweedledee (New Earth) page!
You can jump in and start editing right away or practice in our sandbox. You should also have a peek at our guidelines and naming conventions. You can also create a new page from scratch.

You can have your own user page; it is all about you!
The two easiest ways to interact with other users are to join the forums or leave messages on users' talk pages. Remember to sign all of your posts, so we can quickly tell who left the message.
(Hint: Use four tildes (~~~~). This will automatically produce your username and date. You can also use the 'signature' button in the edit toolbar.)

If you need some help, just add the text {{helpme}} to your page and someone will come to your rescue.

You can include userboxes on your user page to express yourself. Your page can contain:

Be sure to visit our sister-sites, the Marvel, Image, and Dark Horse Database Projects so you can begin posting on them as well!
No need to re-register, just sign in! Your account works on all Wikia wikis!

As far as I can tell, Tupka's ruling isn't unfair. You were given repeated warnings to stop moving Julie Caesar's page and editing other users' user pages, but continued to do so. I will, make sure your block allows you to respond to messages on your own talk page. That way, you can discuss it further here, rather than on alternate sites and talk pages. Please be aware that you are not blocked forever. Your block will be lifted automatically on May 19, 2011.

Look man. You were causing problems and Tupka let an acronym with profanity in it slip. It happened. If you don't approve, you can leave. Honestly, I don't know what you hope to accomplish running to the other admins to tell on him; we're not going to punish him. I suggest you just let it go and get back to what we're all here for, reading and indexing DC Comics. Kyletheobald 21:38, May 26, 2011 (UTC)

I noticed you removed the bolded words from the quotation on Green Arrow (Volume 2) #16. Just wondering why. I add the bolded words and phrases to quotes as they appear on the comicbook pages in order to preserve the emphasis.

There's no need to immediately add a bad guy to someone's rogue's gallery if they showed up for one issue. Sivana is not a Power girl villain, the same as he is not an Outsiders villain nor a Plastic Man villain, despite going up against them for a story arc. He's a Marvel Family villain only. -- Tupka217 16:56, July 1, 2011 (UTC)

Im not saying its a big deal, and I'm not about to hunt them down and roll them back, but going around converting international English spellings to their American spellings isn't exactly what I'd call contributing, when ultimately it has no effect on the wiki's content. - Hatebunny 22:30, July 4, 2011 (UTC)

Hey Batfan. You need to stop changing the spellings. It is perfectly fine to use the international English versions of words like "humour" instead of the American spelling "humor". It isn't necessary and will probably tick people off. They aren't spelling errors so just leave it alone. Kyletheobald 22:15, July 8, 2011 (UTC)

Do you know any characters who appeared in Batman: The Brave and the Bold (TV Series) Episode: Powerless!?

Sorry about all of the extra work I put you through yesterday. Edit

Sorry for all of the extra work I put you through yesterday. User:Midoki24 explained it to me.

Purely to be pedantic: the word 'moustache' is a perfectly correct spelling used in much of the world which did not need changing. 'Mustache' is a local variant used in parts of the USA only. Tony ingram 22:27, August 13, 2011 (UTC)

To add: sorry, I may be being unduly touchy, but the internet is not a national but a global thing, open to all, and I've repeatedly found my own perfectly correct British spellings 'corrected' on the DB with versions which to me look incorrect. 'Moustache' is acceptable even in much of the US as I understand it, so that was the last staw this evening, it just irritated me for no particular reason. No offence intended. Tony ingram 22:39, August 13, 2011 (UTC) Moustache is a Commonwealth word and is incorrect on my computer.--1966batfan 23:40, August 13, 2011 (UTC)

Hey, sorry I didn't get back to you yesterday. I'm not going to lie, the Jar Jar impression was pretty annoying the other night in chat but that wasn't why I left. I had some non-internet stuff to do. I can't speak to why the others left but no one mentioned it yesterday either so I think you're ok. Kyletheobald 16:18, August 19, 2011 (UTC)

When you add one villain to a comic, but nothing else, please add {{Missing Characters}} at the bottom. Also, Quality's Blackhawk comics had 4 or 5 stories per issue, so the villains don't necessarily appear in the first story. --Tupka217 22:05, August 21, 2011 (UTC)

You've said "Sorry" twice but you continue to add images, all of them taken directly from the DCAU wiki, without the proper template, episode information, character information, and some credit to the original uploader - yours sincerely in many of the cases. Please either follow the rules or stop adding images. If you need help, ASK. It's what we (the administrators) are here for. --Tupka217 20:02, August 26, 2011 (UTC)

I take it the English spelling of 'travelled' is no more acceptable to you than 'moustache', then? Please stop 'correcting' my spelling when it isn't incorrect, Batfan. It's extremely irritating to me.Tony ingram 08:08, August 27, 2011 (UTC)

Hello, I will talk to William but you should continue to attempt to communicate as well, If he set the ban he will have to remove it.--Robert Alvarez 03:23, September 6, 2011 (UTC)

You were banned from the chat for harassing other users. Immediately after getting banned, you repeatedly harassed the administrators involved and used threats... then made a sockpuppet account to try and overturn the decision. You've been continuing to harass people on the site about this since then and deliberately misrepresenting the situation, which is not a very good way to demonstrate that you should be allowed back into the chat because you won't harass people anymore.

Guess what? You're STILL expected to use the Image template. We've asked you repeatedly to do so. All you did was say sorry and go on not following policies. We have policies for a reason, you know.

Retrieved from "https://dc.fandom.com/wiki/Message_Wall:1966batfan/User_talk_archive"
Community content is available under CC-BY-SA unless otherwise noted.