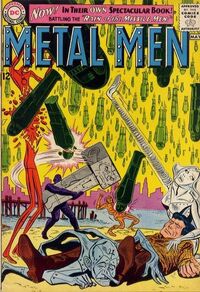 Metal Men (Volume 1) was the first ongoing series to spotlight the Metal Men after their introduction in the pages of Showcase. It began in 1963 and was published on a bimonthly basis. The series was originally cancelled with issue #41, in 1970. Three reprint issues, which continued the original numbering (#42–44) were published in 1973. The series launched again in 1976, starting with issue #45, continuing the numbering from where the reprints had left off. As before, the series was published on a bimonthly basis. It was finally cancelled in 1978 as part of the DC Implosion.

Retrieved from "https://dc.fandom.com/wiki/Metal_Men_Vol_1?oldid=1986942"
Community content is available under CC-BY-SA unless otherwise noted.