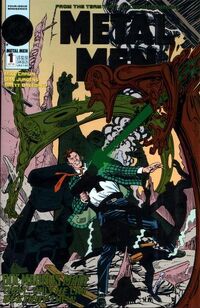 Metal Men (Volume 2) was a four-issue miniseries published from October 1993 to January 1994. It provided a new origin for the Metal Men, retconning their first one. However, this new origin was itself retconned in the 52 maxiseries, restoring the Metal Men's first origin.

Retrieved from "https://dc.fandom.com/wiki/Metal_Men_Vol_2?oldid=1986940"
Community content is available under CC-BY-SA unless otherwise noted.