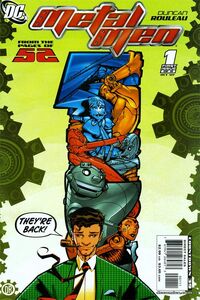 Metal Men (Volume 3) is an eight-issue miniseries which began in late 2007. The series is written and drawn by Duncan Rouleau, and features a new member of the Metal Men, the female Copper. The events of Metal Men (Volume 2), and the origin it gave, were retconned by 52 (Volume 1) as being part of a psychotic break that Will Magnus suffered. Volume 3 returns to the Metal Men's first origin as Magnus' robotic creations rather than human beings bonded to Responsometers.

Retrieved from "https://dc.fandom.com/wiki/Metal_Men_Vol_3?oldid=2242163"
Community content is available under CC-BY-SA unless otherwise noted.