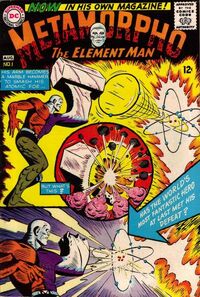 Metamorpho (Volume 1) was an ongoing series published by DC Comics from July, 1965 to March of 1968. The series featured adventurer Rex Mason, aka, Metamorpho, the Element Man. The title also featured Rex's supporting cast including, his lover Sapphire Stagg, her father Simon Stagg and Simon's brutish servant Java. The entire series was collected in black and white in Showcase Presents: Metamorpho Vol. 1. Prior to gaining his own series, Metamorpho made appearances in The Brave and the Bold #57–58.

Retrieved from "https://dc.fandom.com/wiki/Metamorpho_Vol_1?oldid=2266051"
Community content is available under CC-BY-SA unless otherwise noted.