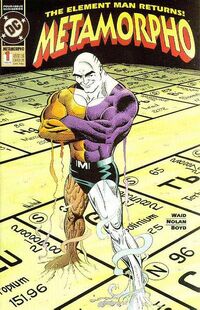 Metamorpho (Volume 2) was a four-issue limited series published by DC Comics from August to November of 1993. The series re-imagined the origin of the title character Metamorpho, the Element Man.

Retrieved from "https://dc.fandom.com/wiki/Metamorpho_Vol_2?oldid=1987134"
Community content is available under CC-BY-SA unless otherwise noted.