Misfit is Charlotte Gage-Radcliffe, a teenage vigilante with the power to teleport. When her mother died in a house fire, she was orphaned and became homeless. Charlotte briefly operated as Batgirl using a homemade costume, until Barbara Gordon approached her and made her stop. Realizing that she had nowhere to go, the Birds of Prey adopted her as a surrogate family. She has also been a member of the Teen Titans. Charlie Gage-Radcliffe was created by Gail Simone, first appearing in Birds of Prey #96. (2006) She first appeared as Misfit in Birds of Prey #101. (2007) 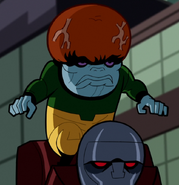 Misfit
Other Media
The Brave and the Bold