Mister E is a mentally unstable magic-user and supernatural vigilante dedicated to fighting darkness. Despite being blind, he is said to have the ability to see what's most important; this includes concepts such as evil. In addition to this he learned the ability to walk through time from his older self. In the New 52 reboot, Mister E is reimagined as a former superhero who had turned evil in his pursuit for magical domination. He has also been a member of the Trenchcoat Brigade and the Cult of the Cold Flame. Mister E was created by Bob Rozakis and Jack C. Harris, first appearing in Secrets of Haunted House #31. (1980) 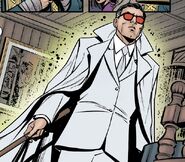 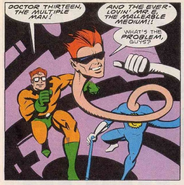