Eric Morden, a "one-man crime wave", was a master criminal who once stole one of the Chief's lunar exploration droids Rog in an attempt to join the Brotherhood of Evil. However, when this plan was foiled by the Doom Patrol, Morden escaped to Paraguay, where he willingly exposed himself to a Nazi scientific experiment called the White Room that untethered him from reality and made him an abstract being called Mister Nobody. As Mister Nobody, Morden would found the Brotherhood of Dada to bring his new brand of surrealist nihilism to the world, again coming in conflict with the Doom Patrol. Mister Nobody was created by Arnold Drake and Bruno Premiani, first appearing in Doom Patrol #86. (1964) 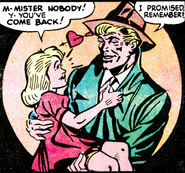 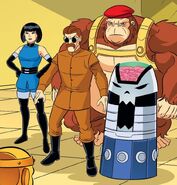