Monarch is a super-villain identity originally used by Hank Hall, also known as Hawk of Hawk and Dove. Hall took this identity to become the totalitarian dictator of Earth in the post-apocalyptic Armageddon 2001 future, where his partner Dove had died. This future was prevented by Matthew Ryder, but Hall still went insane and became Monarch earlier while the world's heroes could still stop him. His signature weaponry is a suit of power armor that magnifies his own abilities. Eventually Hall would abandon this identity to become Extant during Zero Hour. Captain Atom became Monarch when he was forced to wear the armor as a containment suit, and turned insane as well. During the events of Countdown, Atom used these powers to travel the Multiverse assembling an army to fight the Monitors. Eventually the armor was destroyed by Superboy-Prime and Atom returned to sanity as an amnesiac. Monarch was created by Archie Goodwin, Dennis O'Neil and Dan Jurgens, first appearing in Armageddon 2001 #1. (1991) 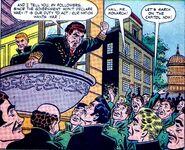 Monarch of Menace
Earth-One
(other versions) 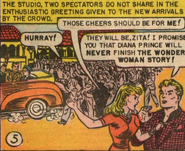