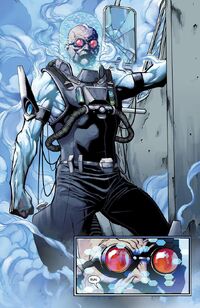 Everybody chill!...and read my books!

Mister Freeze was a renowned scientist whose beloved wife, Nora was diagnosed with a rare illness that would cause her death. As no cure was developed for such illness, Fries used cryogenic technology to freeze Nora's body and preserve it until he found a cure. However, due to a disastrous accident, Freeze was exposed to a series of chemicals that caused his body's homeostasis to change drastically. Freeze's new condition required him to stay at temperatures below zero, turning his skin white.

The accident twisted his mind and he began a criminal career to support his mad experiments and his new way of life. His genius intellect allowed him to build a special suit and weapons designed to turn everything into ice, which makes Mister Freeze one of Batman's most dangerous enemies.

Retrieved from "https://dc.fandom.com/wiki/Mr._Freeze_Recommended_Reading?oldid=2552300"
Community content is available under CC-BY-SA unless otherwise noted.