Naomi McDuffie is a teenage superhero from an alternate Earth that uses energy-based powers mononymously as Naomi. She discovered that she was sent to this Earth to be preserved from Zumbado, the destructive conqueror of her birth Earth.

Naomi was born on Earth in an alternate universe. Naomi's universe was very similar to the Prime Universe, but with a few distinguishing details. After years of human environmental abuse, the Earth's ozone layer collapsed. In the wake of the ozone layer's destruction, undiscovered radiation leaked onto the Earth's surface which had previously been kept at bay.[1]

The radiation didn't harm anyone on planet Earth, but twenty-nine random people across the planet were given access to godlike powers. Naturally some of the twenty-nine sought to rule the world with these newfound powers, while others sought to stop them. After one month of civil war between these two factions, fourteen of the twenty-nine were dead; in addition seven more of the twenty-nine left the planet in disgust, leaving only eight remaining. Eventually these eight were able to call a truce before the Earth was entirely destroyed.[1]

None of the twenty-nine had been able to procreate, until Naomi's mother miraculously gave birth to her. Zumbado, the most vile of the twenty-nine, sought to end Naomi's life to prove his superiority among the twenty-nine. However, Naomi's parents, with the help of a woman called Akira, made preparations for Naomi's escape.[1]

Eventually, her parents' allies brought Naomi to the Prime Universe, where she was discovered and adopted by Greg McDuffie and his wife Jen McDuffie in the small town of Port Oswego. Naomi grew up not knowing anything about her childhood, instead believing that she was an ordinary girl.[1] 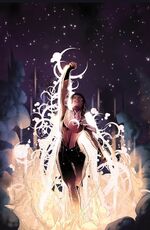 As soon as she gained her powers, Naomi flew back into town where she met up with Annabelle. While Naomi was telling Annabelle everything that had happened, a portal opened and a large man stepped through. The man told Naomi that he had used her newly-discovered powers to lock onto her location and that Akira had sent him to bring her back to their world. Eager to see her birth world, Naomi followed the man through the portal.[2]

Naomi was shocked to discover that her birth world had been almost completely ravaged. The man revealed to Naomi that he was Zumbado, and that her parents had died a long time ago. After sometime talking with Zumbado, Naomi attacked him, determined to claim vengeance for her parents' deaths.[2]

Although she was incredibly powerful, Naomi was no match for Zumbado's greater experience, and she was quickly overwhelmed. Fortunately, Lady Akira came to Naomi's aid and opened a portal for her escape back to Earth. Although she was reluctant to leave Akira in the hands of Zumbado, Naomi eventually headed through the portal back home. Although Zumbado tried to follow her, Naomi was able to use her powers to send him back through the portal, which subsequently closed.[2]

Immediately after facing Zumbado Naomi headed to Metropolis, the home of Superman, seeking some kind of mentor-ship from the Man of Steel. Eventually she crash-landed in a hot-dog stand outside the Daily Planet building where she was discovered by Superman. Upon seeing Superman, Naomi asked the Man of Steel for help, to which he gladly accepted.[3]

Naomi and Superman flew to the Hall of Justice where she filled him in on what she knew about her powers and the incident with Zumbado. The Wonder Twins, who were interning at the Hall of Justice, gave Naomi a medical check up in the hopes of discovering the origin of her powers. She was also questioned by Dr. Ray Palmer, who wished to know which Earth she originated from in the Multiverse, a question which she had no answer to.[3]

Batman soon arrived and began questioning Naomi as well, at which point Superman had to leave to deal with a secret organization called Leviathan.[3]

Retrieved from "https://dc.fandom.com/wiki/Naomi_McDuffie_(Prime_Earth)?oldid=2835612"
Community content is available under CC-BY-SA unless otherwise noted.