If the night is made for dreams, you see, I prefer to experience them awake.

Natalia Knight was Nocturna, an enemy of Batman. She operated a criminal organization with her brother Thief of Night and later Nightshade and had to operate at night because of her photosensitive skin.

Natasha Knight was a street orphan who was rescued by a well-known gangster called Charles Knight at the age of 12. She grew up with him, with all the privileges and luxuries of his ill gotten money. However, Natasha didn't know about his illegal activities until she was of age, when he died during a crime and the police told her the truth. In his funeral, Natasha met Anton Knight, Charles biological son and he proposed to start an alliance to continue their father's lifestyle, but at first she refused.[1]

A few years later, Natasha developed a passion for astronomy and the night sky. She became an astronomer and found a job at the Gotham City Observatory, which was under Wayne Enterprises' management. While working there one night, she became victim to a radioactive laser, which drained her skin of all pigment and also rendered her sensitive to light.[2]

With her new skin condition, Natasha accepted Anton's proposition and they started a large scale criminal spree using his skills. It was around this time that Natasha adopted the alias of Nocturna. When she and Anton planned to steal from members of Wayne Enterprises during a party at Wayne Manor, Natasha met Bruce Wayne and she noticed his fascination for her. When Anton showed up, the crime went smoothly, but soon they were found by Batman, who managed to capture Anton. Nocturna managed to escape from Batman's grasp,[1] but when she tried to release her adoptive brother from prison, she was captured by the Dark Knight.[3] 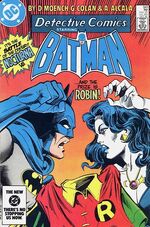 The fight for Robin

Eventually, Nocturna escaped from prison and started a new criminal scheme called Nightmares, Inc., organized by a new partner in crime by the name of Nightshade.[4] However, Nocturna ended their partnership after Nightshade became despondent with her leadership and lack of love for him. Without a criminal partner to provide her with wealth and luxury, Nocturna turned her attention to Bruce Wayne's legal battle to gain custody of the orphan, Jason Todd. As Natalia Knight, she filed the adoption papers and became mother of Jason thanks to political manipulation by Mayor Hamilton Hill. This was all part of Nocturna's plan to force Bruce Wayne into marry her in and continue living in delight.[5]

When her former partner, the Thief of Night escaped from prison, she learned that he had become a murderer and her love for him turned to hate. Rejecting the Night-Slayer, Nocturna prepared to receive Jason as her son, but she came across Batman once again. This time, Nocturna assisted Batman against the Night-Slayer, almost killing him and at that moment, she realized she was attracted to the Dark Knight as much as he was attracted to her.[6] During their brief romantic encounter, Nocturna revealed that she knew about Batman's secret identity, but she promised to keep the secret as long as she could become his partner and mother of Jason Todd.[7]

Having won the legal battle for Jason's adoption, soon she was attacked by The Mad Hatter, who wanted to steal her memories for his own benefit. Nocturna was saved by Batman and Robin,[8] and soon she returned the favor by allowing Jason to go out as Robin and helping them capture the Mad Hatter for good.[9] Afterwards, Nocturna tried to show Jason her honest change, but all she received in turn was mistrust.[10]

After having adopted Jason, the Night-Slayer returned and planned to murder Nocturna and her new son in revenge for her murder attempt against him. Although his plan was thwarted by Batman, the Night-Slayer managed to convince Batman that he, Bruce Wayne, was the Night-Slayer and subsequently, Anton Knight started posing as Batman.[11] Nocturna and Robin worked together to stop Knight, but they were no match for the well trained criminal.[12] Afterwards, Nocturna helped Batman capture the Night-Slayer and expose Mayor Hill's crimes, but despite all this, she couldn't earn the love and trust of Jason, for this reason she decided to let him return to Wayne Manor.[13] After returning Jason to Bruce, Nocturna vanished without saying anything and desisted from Jason's custody, leaving only a concerned Batman behind.[14] 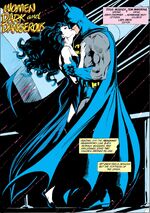 A Kiss to Remember

Nocturna returned to Gotham when the skies turned red. She settled on the old and abandoned observatory, where she tried to understand why the skies changed as this meant the end of the night as Nocturna loved it. Her comeback alerted the authorities, but before the police could find her, Jason Todd located her and finally accepted to call her "mother".[15] Shortly afterwards, Nocturna was confronted by Batman, who couldn't take her to the authorities and instead, they surrendered to their mutual love and kissed for a second time.[16] After the kiss, Batman pushed Nocturna away due to her dark and dangerous nature and she pointed out that being like that was what caused him to love her.

Leaving this paradox for Batman to ponder, Nocturna became the new temporary leader of the False Face Society, reaping the profit from them to finance her studies of the red skies. Unfortunately, she was tracked down by Catwoman, who wanted to take her to the authorities to clear her own name. Nocturna only reacted when Catwoman attacked Robin, but the fight was stopped by Batman. After the struggle, Catwoman was struck by lightning, leaving her barely alive and the heroes left Nocturna alone in order to save Catwoman, while the Night-Slayer continued her hunt for Nocturna.[17]

Losing hope for finding a solution to the red skies, Nocturna decided to give away her location so that the Night-Slayer could find her and end their torment. Waiting in the observatory under the red rain, Nocturna was unaware that Robin was exposing himself to protect her.[18] Night-Slayer eventually found Nocturna and she embraced her fate, willingly accepting death. Depite Batman and Robin's intervention, Nocturna was stabbed and seriously wounded by the Night-Slayer and in the aftermath of the fight, she was presumed dead as her body was taken away in her hot air balloon into the raging red storm.[19]

Many years later, Nocturna returned as a member of the Injustice League.[20] She and many of her Injustice League cohorts were exiled to the planet Salvation, and joined as a member of Vandal Savage's camp along with her three female companions Lady Flash, Cheetah, and Phobia.[21] Nocturna and her companions were disgruntled in their situation after they were supposedly promised by Savage that he would made one of them his queen, in fact he never intended to from the beginning. Eventually the women figured out of Savage's manipulation and attacked him until being confronted by the other arriving villains who are escaping from an army of Parademons. Nocturna and many of the other villains were sent back to Earth with a teleportation device built by Lex Luthor and the other skilled villains.

Some time later, Nocturna began stealing from random houses in Gotham until she was stopped during her escape attempt by Stephanie Brown. However, she wasn't captured by Robin, as the only thing that the GCPD found was the hot air balloon in which she tried to escape.[22] A short time later, Spoiler spotted Nocturna again trying to steal from the people at the Robinson Ball and she stopped her, using her invisibility gear to fight Nocturna's newfound power of teleportation.[23]

Retrieved from "https://dc.fandom.com/wiki/Natalia_Knight_(New_Earth)?oldid=2775698"
Community content is available under CC-BY-SA unless otherwise noted.