Negative Woman is Lt. Col. Valentina Vostok, a Soviet pilot who was fused with the energy that created Negative Man. The negative energy gave her several powers including the ability to project a "soul-self" that could fly, become intangible, and cause explosions. However, using this ability left her physical body vulnerable. Eventually she lost her powers, and began working for the U.S. Government in organizations such as Agency and Checkmate. Negative Woman was created by Paul Kupperberg and Jim Aparo, first appearing in Showcase #94. (1977) 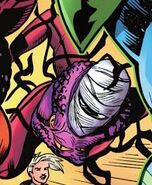