Land of the Unliving

Lord of the Unliving

Nekron is the Lord of the Unliving, one of the most powerful forces in the universe, able to summon the dead to serve him towards whatever ends he might seek.

Nekron is a physical manifestation of the concept of death as a cosmic certainty and as the ultimate opponent and opposing force of all life that exists.[1] As a cosmic force for evil, he has frequently found himself in conflict with the Green Lantern Corps.

Nekron's past before becoming the Lord of the Unliving is shrouded in mystery, with rumors circulating that Nekron is darkness itself, existing before life entirely, or that he was created by the darkness as its protector. Another claim is that the Guardians of the Universe clashed with Nekron close to the beginning of the universe and were the ones to imprison him in the Land of the Unliving.

Trapped in his own realm throughout most of eternity, Nekron first became aware of the world of the living through the deceased cosmic villain Krona. A rift was opened in the continuum between dimensions, caused by the death of an immortal. And Nekron looked upon the universe and saw all that was life itself, and determined that he would become its master. So that he might escape his prison, he resurrected and empowered Krona, with an army of the undead at his disposal, to slaughter the Guardians of the Universe and widen the rift.[2] It took the combined might of the entire Green Lantern Corps to defeat them, in a colossal battle that resulted in literally hundreds of casualties. Hal Jordan entered the Land of the Unliving on a suicide mission, and harnessed the souls of his fallen Lanterns to fight back against the great evil. Their combined willpower overcame Nekron long enough for the Guardians to seal up the rift, and Hal escaped, leaving the Lord of the Unliving once more condemned to his lifeless prison.[3] 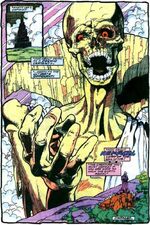 Although largely confined, Nekron has made several more breaches into our world and had interactions with superheroes. After Captain Atom died briefly, he was introduced to several incarnations of Death, including Death of the Endless and the Black Racer. They were each presented as a component of death... and Nekron represented the concept as a cosmic certainty, death as the ultimate opponent.[1] In an attempt to gain control of the Quantum Field life energy of the planet, he had carefully engineered the hero's death. Although he absorbed a great deal of the power, Captain Atom used his connection to steal energy from Nekron's own personal field, and depower him enough to defeat him in physical combat.[4]

Underworld Unleashed allowed him another opportunity to gain entrance to the physical plane. Destruction of the Tower of Fate created another rift into our dimension, and Nekron fought Nebiros for the privilege of conquering the world. He won the battle, and the undead souls of the damned surged across the Earth as Hell literally broke loose.[5] Alan Scott and Fate teamed up against him. Nekron almost gained full access to our world, but fighting against him with the great supernatural strength of Fate gave Green Lantern enough time to demolish the portal with his green flame.[6] 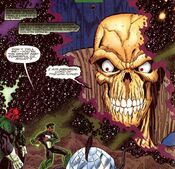 He was able to return to our world once more during Ghosts. An outside supernatural force brought a number of dead Green Lanterns back to life, calling themselves the Green Lantern Corpse. This created another crack in his realm, but still not one large enough for him to squeeze through. Taking control of the undead Lanterns, he sent them to capture the last remaining descendant of his original nemeses... Kyle Rayner. If Nekron had killed him and harnessed his powers, then he would finally have been able to leave his prison, but Kyle escaped back out through the crack and personally put each and every one of the rogue Lanterns down in single combat. Although it was a long and difficult battle, putting them back to rest sealed the portal and ended Nekron's threat once more.[7]

Nekron was accidentally summoned onto our plane by the supernatural hero Witchfire, who used his incantation without realizing the consequences it would have. She teamed up with Wonder Woman to prevent him from sucking the life-force out of any more innocents, while he was feeding. The combination of mystical energies and godlike blows was sufficient to drive him back into his own realm on that occasion.[8] 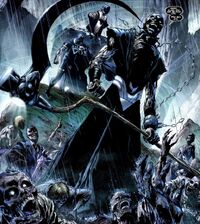 Following the Final Crisis, Nekron makes his triumphant return during the Blackest Night, where he forms the Black Lantern Corps composed entirely of his zombies equipped with power rings to wreak havoc upon the universe. His plans for this stretched back toward the Sinestro Corps War, when he killed the Anti-Monitor and absorbed him to energize his own Central Power Battery on the planet Ryut in Sector 666.[9] The battery wouldn't become completely active until it was discovered and disturbed by Lanterns Ash and Saarek, his first new victims.[10] He has taken the fallen Guardian named Scar as one of his servants, for she was burned by the Anti-Monitor and poisoned by his touch, causing her to slowly die and come under his influence.[11] There is also evidence that he has been influencing William Hand, the criminal known as Black Hand, his entire life. His control over Black Hand was solidified when Hand killed himself and his family, with Nekron taking him as his herald.[12]

As his influence spreads throughout the universe, the dead rise and return to take revenge on the living, building his power by literally devouring the hearts and emotions of all those who still breathe.[13] Only those with emotional ties to superheroes and villains are resurrected, to achieve the maximum potential. The sheer quantity of death caused by his Black Lantern Rings charges the Central Battery to full power. At this climax, he transports himself and his forces down to Earth to personally command his army. Landing in the middle of Coast City, he turns every single dead citizen into a Black Lantern, announces that all owe their lives to him, and he has come to collect.[14] Many of Earth's mightiest heroes rally to defeat him, and representatives from all seven Lantern Corps. Atrocitus, Carol Ferris, Hal Jordan, Indigo, Larfleeze, Saint Walker and Sinestro pour their combined beams into his Power Battery, hoping to obliterate it with the full life-force energies of creation. This only makes him stronger, and he seems to have planned this. Nekron resurrects Batman as one of his most powerful agents, who then kills and revives Animal Man, Donna Troy, Green Arrow, Ice, Kid Flash, Superboy, Superman and Wonder Woman as Black Lanterns. These are all people who have come back from the dead at some point in their lives, and he claims they only escaped because he let them... to further his own goals. He plans to use his army to uncover a dark secret of the Guardians... and then return the universe to a state of quiet order.[15]

Nekron's goal is revealed to wanting to find and destroy the embodiment of life itself: the white Entity. He kills one of the Guardians and uses their blood to draw the Entity out of hiding, then attempts to kill it and with it, which will in turn kill all of life in the universe. Sinestro bonds with the Entity and attempts to battle Nekron.[16] Despite Sinestro destroying his physical form, another Black Lantern simply picks up his weapon, becoming Nekron's new physical form. Nekron then manages to take the Entity out of Sinestro. Hal Jordan bonds with the Entity and uses its power to restore the living heroes transformed into Black Lanterns to their normal selves. Hal uses the Entity to transform the heroes into White Lanterns, together they defeat Nekron by resurrecting Black Hand thus destroying Nekron's link to the living plane. The Entity resurrects the Anti-Monitor which destroys the Black Lantern Battery. With his link to the earthly plane severed Nekron's body is destroyed, ending the Blackest Night.[17]

Retrieved from "https://dc.fandom.com/wiki/Nekron_(New_Earth)?oldid=2721069"
Community content is available under CC-BY-SA unless otherwise noted.