Start a Wiki
This title is Suggested for Mature Readers.
This page contains information about Neverwhere (Volume 1) . This nine-issue limited series, Written by Mike Carey; Art and Cover by Glenn Fabry, is based on the best-selling novel Neverwhere by Neil Gaiman, which was based on the BBC TV Mini-Series "Neverw
Neverwhere Vol 1 (2005-2006)
(published by Vertigo) 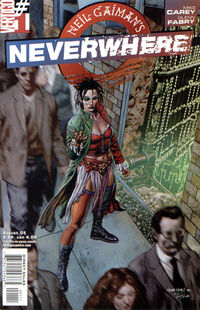 Retrieved from "https://dc.fandom.com/wiki/Neverwhere_Vol_1?oldid=2018917"
Community content is available under CC-BY-SA unless otherwise noted.