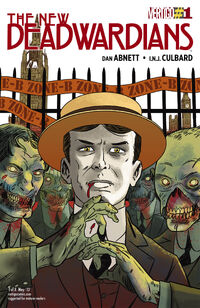 The New Deadwardian age was started when Prince Albert had died. In a attempt to help Queen Victoria recover from her sadness at the prince death, the Sons of Adams Coerce a wizard by the name of Mr. Salt into casting the spell to bring Prince Albert back from the dead, in order to bring happiness back to the Queen. Unfortunately, not only did it brought him back the spell had also revived everything else that had ever been dead, resulting in the Restless Curse. The Memorial War soon started to fight against the Restless. During the five year the military created the cure to help fought against the Restless, inadvertedly creating the Young (Who are like vampire). fifty years have passed since the event London is seperated into zones (With fences keeping the restless out).

Retrieved from "https://dc.fandom.com/wiki/New_Deadwardians_Vol_1?oldid=1133704"
Community content is available under CC-BY-SA unless otherwise noted.