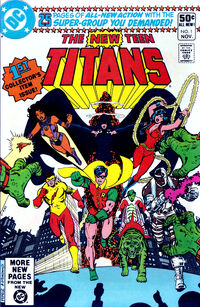 The first volume of the New Teen Titans began publication in November of 1980, with co-creators Marv Wolfman writing and George Pérez providing pencils. The series introduced a variety of new villains, including the popular mercenary known as Deathstroke the Terminator, Trigon, the H.I.V.E. and the Fearsome Five. With issue #41, the title of the series changed to Tales of the Teen Titans. This era of Titans history saw the addition of Jericho to the team's ranks and the evolution of Robin into his current guise as Nightwing.

Retrieved from "https://dc.fandom.com/wiki/New_Teen_Titans_Vol_1?oldid=2777031"
Community content is available under CC-BY-SA unless otherwise noted.