"The Great Leap, Part Two": Nightwing recovers after the helicopter crash and he finds that he and Carol Bermingham are still under attack by whoever wants to kill Carol. Summoning the last bits of energy left in him, he starts crawls towards Carol, uses a [[Batro

Impressive, Doctor Pennyworth. I'm gonna call Doctor Mid-Nite and maybe you guys can team up for a new reality show: "The Brave and the Bald."

Nightwing recovers after the helicopter crash and he finds that he and Carol Bermingham are still under attack by whoever wants to kill Carol. Summoning the last bits of energy left in him, he starts crawls towards Carol, uses a Batrope to attach her to his body and he sets the Wing on auto-pilot. Nightwing grabs the Wing with the right arm, which was injured by a bullet wound and with the left arm he grabs Carol and prevents her from falling while they travel across Gotham City, away from danger.

Moments later, Nightwing finds one of Batman's safe places on the top of a building and lands there, with great difficulty. Nightwing opens the secret entrance to the penthouse bunker and tells Carol to get in and stay inside until he comes back. However, as soon as Nightwing gets ready to fly the wing again, his strength abandons him and he passes out, letting the Wing carry him to Wayne Manor, where Alfred spots the incoming Nightwing and hurries to the Batcave, where Nightwing crashes and Alfred gets him medical attention.

Alfred starts to operate Nightwing to remove the bullets from his shoulder and Nightwing insists to stay conscious during the whole procedure and during the operation, they both seem to think that Bruce is gone for real this time. However, Alfred removes the bullets like a true expert and afterwards he gives Nightwing a strong sedative that puts him to sleep and allows him to recover properly. Alone in the Batcave, Alfred almost crumbles down to the burden of losing Bruce and almost losing Richard. When he recovers, Alfred sits besides the unconscious Nightwing and holds his hand in a fatherly way.

A few hours later, Alfred is awaked by the roaring of Robin's Motorcycle and turning his head he notices that Nightwing has already recovered. He left a thankful note besides Alfred and is driving out of the cave on the motorcycle. Nightwing reaches the safe place where he left Carol and upon entering, he is almost attacked by the woman, who thought he was someone else. It has been a day since Carol was dropped there and Nightwing takes her with him to New York City, where he leaves her on one of his own safe-places and gives her a device that would allow her to summon and contact him in case she needs it. Before leaving, Carol's phone starts ringing and Nightwing places a chip that prevents the device from being tracked. 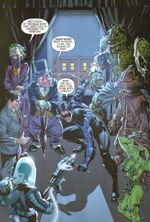 Nightwing surrounded by enemies
Carol then answers the phone and Two-Face is the person who speaks from the other side. He is calling to make sure she is alive and well and to thank Nightwing for taking care of her. Dent seems to know that Batman is gone and Nightwing decides that they've talked enough with him. Nightwing leaves Carol and goes to his hideout at the Cloisters, where he picks up a new Wing and starts patrolling New York. Alfred contacts Nightwing and tells him that after examining the bullets, he found traces of Scarecrow's Fear Toxin and they think that the pattern doesn't fit. At that precise moment, Nightwing receives a signal from the safe-house and he knows that there's been a security breach. Nightwing decides to go and save Carol, despite Alfred's advice to go to the Batcave and remove the fear toxin from his body.

As soon as Nightwing enters the safe-house he is confronted by the entire rogues gallery and they all seem to be prepared for Nightwing's death.

Retrieved from "https://dc.fandom.com/wiki/Nightwing_Vol_2_148?oldid=2516800"
Community content is available under CC-BY-SA unless otherwise noted.