"War Games: Act 3, Part 3 of 8: Casualty of War": Batman sends his troops on single missions in order to take back Gotham City from the criminals that are currently in control. Batgirl is sent to deal with Kille

Batman sends his troops on single missions in order to take back Gotham City from the criminals that are currently in control. Batgirl is sent to deal with Killer Croc and Suicide King; Robin is sent to swipe the entire city and check with Batman later. With Orpheus dead, Onyx is assigned as the leader of the Hill gang and Nightwing is sent to the west side of Gotham. Batgirl tries to warn Batman about Spoiler's involvement in the whole "war games" plan, but Batman stops her from speaking in front of Robin and after he is gone, Batman assures her that he is going to find Spoiler.

Nightwing races across the rooftops of Gotham, thinking once again on his involvement in the murder of Blockbuster and his feelings of unworthiness as a member of Batman's team. However, his worries disappear when he spots Firefly going inside a building belonging to the Escabedo Cartel. Nightwing remembers Firefly's involvement in the burning of Haly's Circus and follows the criminal inside the building. Firefly is pissed and looking everywhere for anybody in the building and Nightwing realizes that he has been working for the Escabedo Cartel, but now that the gang has been eliminated, Firefly has no way to claim his money from them. Nightwing attacks Firefly by surprise and the arsonist uses his flamethrower against Nightwing. Nightwing uses a desk as a shield and he throws it at Firefly, almost hitting him in the head. Firefly stumbles and falls down, telling Nightwing that he must not kill if he is with Batman. However, as Nightwing approaches him, Firefly recognizes Nightwing as the one who killed Blockbuster and now he is cowering in fear. 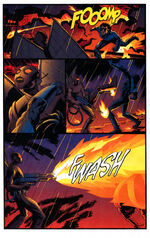 Firefly and Nightwing on a deadly duel
Meanwhile, Catwoman arrives at Holly's apartment and she learns that Spoiler has escaped from Holly's care a few hours back. Catwoman acknowledges that Spoiler's persistence might get her killed or promoted by Batman.

Nightwing and Firefly continue their fight outside of the building and they give no sign of stopping. At that moment, Oracle learns through her system that the GCPD are attacking criminals and vigilantes alike. A couple of officers arrive at the scene where Nightwing and Firefly are fighting and they shoot at both of them. Nightwing tries to use Firefly's metal wings as a shield, but he is shot on the leg. Firefly mocks him and Nightwing knocks him out for good. Nightwing leaves Firefly at reach of the police officers and he tells them not to shoot him, but they aren't listening and they keep shooting Nightwing as he goes away from the place. A few moments later, Nightwing stops to rest on a fire escape ladder near the top of a tall building and tries to contact Batman by radio and tell him that he has been shot and is badly injured, but he can't stand the pain and soon falls unconscious.

Later, Black Mask returns to his hideout and finds that Spoiler has managed to free herself, but has left a trail of blood behind her. Black Mask arms himself with a sharp weapon and starts looking for her.

Retrieved from "https://dc.fandom.com/wiki/Nightwing_Vol_2_98?oldid=2660186"
Community content is available under CC-BY-SA unless otherwise noted.