You see, I'm what you might call a "mentalist" or "psychic".

Madame Xanadu, born Nimue Inwudu, is an immortal sorceress and soothsayer, aiding the magic community from her magic shop.

Nimue Inwudu cast a spell on Merlin. Merlin had the last laugh, though, as he succeeded in stripping her magic away from her. She wandered for some time before deciding that she wanted to atone for her sins. She did so by helping those troubled with the supernatural. She is descended from Gypsies, but has operated her fortune telling parlour out of Greenwich Village for many a year. She was later able to gain her immortality by besting Death in a game of cards. She however remained without any real magic might of her own, which has led her to manipulate various forces in order to gain power.

Over the centuries Madame Xanadu developed herself as an adviser, and now Xanadu often meets clientele plagued by supernatural problems. Although she can advise them, some force prevents her from directly interfering in solving their troubles. If one of her clients manages to conquer a supernatural force, she can contain that entity in jars within her fortune parlour to prevent it from causing any further trouble.

After Spectre had his power diminished by the Presence because he failed in defeat the Evil, Madame Xanadu used her psychic abilities to locate the avatar of The Spectre until his return to Earth. Xanadu also learned of the death of Spectre's former human host, Jim Corrigan and she preserved the body until Spectre's eventual return.[1] When that day came, Xanadu allowed Spectre to return to Corrigan's body, bringing them both back to life.[2] Since that day, she acted as the Spectre's spiritual adviser as his powers were reduced and he became bound to the body of Corrigan.[3] Her powers were also increased due to the Spectre's presence and she used it to her advantage,[4] although she truly acted as an advisor for both Corrigan and Spectre.[5] 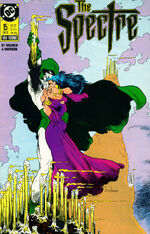 Xanadu eventualy developed a strange relationship with Spectre as the two of them exposed and entwined their individual consciousness in a "mystic intercourse". The process not only restored some of Spectre's former powers for the duration of their psychic intimate contact, but it also produced physical and mental pleasure to Madame Xanadu, who was more than willing to share the experience with Spectre, when given the choice.[6]

After the Manhunters' invasion,[7] Madame Xanadu attended the mystical gathering organized by Spectre, where she and the rest of the magical entities of Earth agreed to continue protecting mankind for the foreseeable future.[8] Right after that, however, Xanadu and her parlor were attacked with dark magic by the Cult of the Blood Red Moon.[9][10] They had learned that Xanadu was acting as Spectre's protector and advisor and they sought to eliminate her, along with Spectre. Eventually, Spectre and Corrigan managed to stop the Cult and restored Xanadu and her parlor back to normal. Due to these events, Spectre was prompted to confess his love for Xanadu.[11][12]

Xanadu then assisted Deadman in locating James Corrigan's body after he was attacked by a Demon, saving Spectre in the process. Xanadu proved vital in thwarting the plans of the Demon, who wanted to kill Spectre through his human host.[13]

However, after a while Corrigan and Spectre abandoned Xanadu, which caused her to show her true colors. Xanadu remained on the lookout for Corrigan as to find Spectre, but had no success until she was contacted by Amy Beitermann; a social worker who had come in contact with Corrigan.[14] 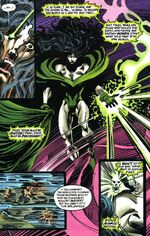 Using a psychic link to Amy, Xanadu was able to find Corrigan and she confronted him alongside Kim Liang and the rest of Corrigan's former employees.[15] Xanadu revealed that they were all magical beings, created by herself in order to keep Corrigan and Spectre close to her. The whole purpose of this was to drain the powers of Spectre for herself and regain some of the mystical powers she once possessed. Since that plan failed and her fake romance with Spectre/Corrigan was revealed, Xanadu decided to take the powers of Spectre by force. She removed Spectre from Corrigan and allowed the spirit to merge with her body, becoming "Madame Spectre". Although her initial goal was to use those powers to retore Earth's former glory, the vengeful nature of Spectre was the opposite of what Xanadu had expected. After a couple of murdeous acts of vengeance, Xanadu relinquished the powers of Spectre and returned them to Corrigan. Finally, Xanadu understood Corrigan's plight and in an effort to earn his trust and show her gratitude and repent, she warned him about the death of Amy at the hands of a murderer.[16]

Xanadu's prediction came true, when the serial-killer known as The Reaver located Amy and set out to kill her.[17] Xanadu tried to help Amy, by assisting her protector, The Spectre on his battle against Azmodus. Her timely assistance allowed Spectre to return to Earth, but Amy's fate was sealed.[18] She was murdered by the Reaver and died in Madame Xanadu's arms.[19]

Xanadu was consulted by the Suicide Squad about the increasingly difficult to deal with Enchantress. She provided the Squad with a ring and necklace that could harm the Enchantress if she tried to use her powers against the wishes of the ring-bearers.

Madame Xanadu also gave Timothy Hunter a reading, helping him along his path as an emerging sorcerer. She also confronted Tim's companion John Constantine, who she believes stole a magic artifact called the Wind's Egg from her.

Although Madame Xanadu, among others, has no great love for or trust in the Phantom Stranger, she is a member of the Sentinels of Magic, a loose group of mages and mystics that were called upon to thwart Asmodel's uprising in Hell. Nonetheless, she prefers to operate alone and is one of the few heroes who has outright refused to ally herself with the Stranger.

In order to gain more power, Madame Xanadu has also bartered her soul to the demon Neron, who gave her three loyal demons to do her commands in exchange. At first, they responded to every little whim of hers, almost raging out of her control. Over time, as she controls her own emotions, she has become able to control the demons as well.

In the Day of Vengeance special it is revealed that Madame Xanadu is still blind. She has regrown her eyes 14 times, only for them to be burned out again, because the Spectre's powers are beyond the powers of Xanadu. However, Madame Xanadu's abode would be the rallying point of the offense against the Spectre, gathering the Phantom Stranger, Zatanna and Nabu.

Xanadu has also found a way around the Spectre's curse by training an adept, Daena, to read the cards for her. Through Daena, she saw the destruction of the world with the Spectre winning and destroying everything. It is at her place that Nabu began his offense against the Spectre as well as the strategy for restoring the Rock of Eternity.

Madame Xanadu's standing in the new magic order has yet to be explored in detail. However, it is known that she is still trying to cure her blindness, She assists the Shadowpact when members of their team were temporary blinded by the mystical powers of the villains known as "the Congregation". It was the mystical aspect that allows her to help, though some of the group are able to heal the blindness on their own.

Madame Xanadu later appears operating out of "Hokus & Pokus Occult Curiosities" in Greenwich Village.[20] She was unable to help Mary Marvel locate Captain Marvel, Jr. She does advise Mary to avoid Gotham City, because "it isn't safe for magic."

Retrieved from "https://dc.fandom.com/wiki/Nimue_Inwudu_(New_Earth)?oldid=2778452"
Community content is available under CC-BY-SA unless otherwise noted.