Monitor Nix Uotan was one of the most dedicated and successful of the Monitors, having groomed his charged universe, "Earth-51," to a state of near perfection.

Unfortunately however, in the aftermath of "The Search for Ray Palmer," his Earth became the site for the gigantic showdown battle between the Monitors and Monarch's armies. With the exception of a single plant, his entire universe was destroyed when Superman-Prime ruptured Monarch's containment suit and unleashed his energies.[1]

Uotan was later given charge of another Earth, but it quickly was infected by the Morticoccus Virus within the Karate Kid.[2] Civilization on that world was destroyed, and most of the human population were turned into gross animal hybrids, with the two exceptions of Buddy Blank, and his grandson Tommy.[3]

Afterwards, believing the Monitors to be incapable of regulating themselves, Nix Uotan decided to set up a team of humans to "watch the watchmen."[4] The team was composed of The Atom (Ray Palmer), Donna Troy, Green Lantern (Kyle Rayner), and the Forager. 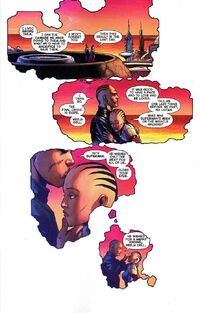 Nix and Wella Dell at the end of their lives as Monitors.

Most recently, he was somewhat unfairly deemed by his fellow monitors to be an incompetent guardian of the Multiverse, and was sentenced to life as a Human on Earth, stripped of both his powers and his immortality.[5]

Nix was revealed to have planned the defeat of the vampiric nature of the Monitor race which was shown most obviously in the Monitors Mandrakk and Rox Ogama who were aiding the master plans of Darkseid to reformat the universe to his designs, by sacrificing the entire Monitor race and their powers over the Bleed to ensure that the 52 Multiverse would continue on despite the destructive effects of Final Crisis. Nix shared his last moments as a Monitor with his love Weeja Dell at the fading Bleed as it collapsed in on itself and all within it.

Nix awoke on New Earth as a young male human being with at least a partial memory of his past life.[6] It is unclear how much he remembers and whether his love Weeja Dell was also reborn into the New Earth reality as Nix was or some other reality or was completely eliminated. It has been stated by DC that Nix retained his memories and became the sole link between the Overmonitor and the Multiverse.

Retrieved from "https://dc.fandom.com/wiki/Nix_Uotan_(New_Earth)?oldid=2880012"
Community content is available under CC-BY-SA unless otherwise noted.