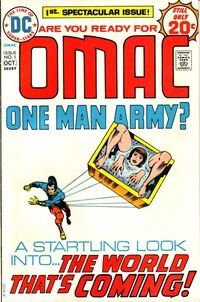 OMAC (Volume 1) began publication in October of 1974 and lasted eight issues, terminating in December of 1975. The series focused on Buddy Blank, also known as the One-Man Army Corps, and was written and illustrated by creator, Jack Kirby. All eight issues were collected in hardcover format in 2008.

Retrieved from "https://dc.fandom.com/wiki/OMAC_Vol_1?oldid=1313074"
Community content is available under CC-BY-SA unless otherwise noted.