My name is Oliver Queen. After five years in hell, I returned home with only one goal—to save my city. For eight years, I've fought alongside brave men and women striving for justice. But then, a Crisis came. And I had to become someone else. I had to become something else. I made the ultimate sacrifice, which helped birth an entirely new universe. Now my friends and family will have to go on without me. And although I have become a Spectre, there is a part of me that will always be the Green Arrow.

Oliver Queen was the Green Arrow, a vigilante who after being shipwrecked and trapped for five years, trained to become a highly advanced fighter and master archer. Upon returning to his hometown Starling City, Queen at first fought crime in an attempt to right his deceased father's wrongs but, later, developed his own morals for defending the city in general. During the Crisis event, Queen died protecting Earth-38, but was resurrected as the Spectre to defeat the Anti-Monitor, though the battle cost him his life.

The son of Starling City industrialist Robert Queen, Oliver was a shallow, spoiled playboy who thought nothing of cheating on his girlfriend with her own sister. 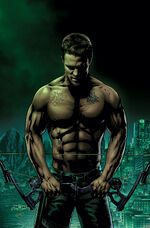 Oliver separated from his home.

Oliver's entire life was flipped upside down during an ill-fated sailing trip on his father's yacht, the Queen's Gambit. The ship was sabotaged in the Pacific ocean, forcing Oliver, Robert and a third crewman to escape in a life raft. Only having enough food and water for one person, Robert killed the third man and told Oliver that he had failed their city and that Oliver needed to survive and right his wrongs. Robert then committed suicide, shooting himself in the head in front of his son. Oliver's raft ended up on the island of Lian Yu, and while scavenging the raft for supplies, he uncovered a list of corrupt one-percenters who were driving Starling City to ruin.

During his third year on the island and failed escape from Lian Yu, Oliver was discovered by Amanda Waller and was forced to work as a top-secret A.R.G.U.S. operative before being returned to Starling City. Transported to Hong Kong, Oliver was denied the ability to make contact with his friends and family back home until he had completed his mission.

By the time Oliver was rescued after five years, he was found back on Lian Yu by a group of helicopters. At this point, he had mastered archery and Eskrima and had become a fluent speaker of Mandarin and Russian. As Oliver attempted to reconnect with friends and family, he also created a Robin Hood themed combat suit and began a one-man war of attrition against the corrupt elite named on his father's list, in order to keep the promise he made his father before he died. He eventually gained valuable allies in the form of John Diggle and Felicity Smoak, who steered him down a less lethal path and toward stopping crimes that affected everyday people instead of limiting his crusade to "the list." But as his allies multiplied so did his enemies. "The Hood" attracted the ire of not only the Underworld but also the police and a mysterious "undertaking" with more sinister, far reaching plans.

Retrieved from "https://dc.fandom.com/wiki/Oliver_Queen_(Arrowverse)?oldid=2879286"
Community content is available under CC-BY-SA unless otherwise noted.