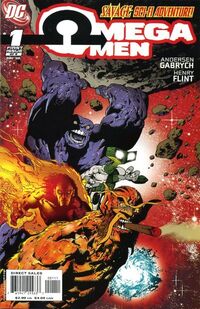 Omega Men (Volume 2) is a six-issue limited series published from December of 2006 to May of 2007. In the series, the Omega Men square off against the galactic threat of Lady Styx, a villain introduced in the 2006 weekly maxi-series 52. Events from this series have repercussions in the 2008 limited series Rann/Thanagar: Holy War.

Retrieved from "https://dc.fandom.com/wiki/Omega_Men_Vol_2?oldid=1659662"
Community content is available under CC-BY-SA unless otherwise noted.