Onomatopoeia is a serial killer who targets non-powered, vigilante superheroes. He earned his name because he imitates noises around him, such as dripping taps, gunshots, etc.

He once stated his nickname to one of his victims, Virago after he shot and killed her. This was the only time he has been seen speaking normally when in his Onomatopoeia persona. He dresses all in black with black gloves and wears a full, black hood decorated by concentric white circles.

One of his notable targets was Connor Hawke, the second Green Arrow. He shot Connor, who was saved by his father Oliver Queen (the first and original Green Arrow). While Connor was being operated on in the hospital, Onomatopoeia returned to finish the job, but was stopped by Queen and Black Canary. He managed to escape and remains at large.[1]

During the Infinite Crisis, Onomatopoeia was recruited by the Secret Society of Super-Villains. He took part in the Battle of Metropolis, where he fought against the Odd Man.[2] Amanda Waller and Atom Smasher considered him for membership in the Suicide Squad to be sent out against the Black Marvel Family, showing that the government was aware of his activities and believed they could contact him.[3]

Onomatopoeia later assisted the Joker in escaping from Arkham Asylum as bait for the Batman.[4] In the process, he shot Deadshot in the head from point blank range, but overlooked Deadshot's ability to play dead. Onomatopoeia paid the Joker to start a gang war with Maxie Zeus, who had begun to sell a drug named "Chuckles", which was made by using Joker Venom. Onomatopoeia eventually faced the Batman in a hand-to-hand fight and lost. In order to escape, he stabbed the Joker in the heart to force the Batman to choose between capturing him or saving the Joker. Batman decided to save the Joker's life, allowing Onomatopoeia to flee.

Following his escape from Batman, Onomatopoeia would again re-encounter the vigilante when he masqueraded as a new vigilante named Baphomet. He made his alias known by aiding Batman in taking down the demon Etrigan, by throwing a bucket of holy water on the demon. He again showed up to help the Batman in stopping Fun Land, a criminal notorious for kidnapping young girls. Once more, he appeared as "Baphomet" to aid Batman in stopping Black Spider; afterwards he and Batman finally engaged in a conversation. Telling the Batman that he wasn't a Gotham City native, and informed him of his alias. Batman gave "Baphomet" his blessing to fight crime in Gotham City, as long as he doesn't kill anyone. After working together for a few weeks, "Baphomet" took Batman by surprise when he removed his mask in front of him. Believing that involves a higher level of commitment, Batman disappeared on "Baphomet". Later, "Baphomet" filled in for Batman (along with Robin} while Bruce vacationed in Aspen with Silver St. Cloud. After capturing Mr. Freeze, he removed his mask in front of Robin, surprising him. Days after single-handedly stopping the Joker, he changed into civilian clothes and walked home. He noticed the Batman was following him and told him that he was married, has two children (a boy and a girl), is an insurance adjuster from Delaware, moved to Gotham City before his first child was born, and began to fight crime after his brother Jerry was killed by a masked criminal. After explaining that he just wants to clean the city for decent people, he began to cry and received a hug from the Batman. Batman soon began to confide in "Baphomet", even confessing to having a bladder spasm after an explosion went off too close to him during his first year as Batman. Batman began to trust "Baphomet" enough to take him to the Batcave, where he introduced him to Silver St. Cloud. Batman proceeded to remove his own mask, revealing his identity. As Batman turned his back, Onomatopoeia revealed himself by speaking "Ka-Klak" (the sound that Bruce made when placing his utility belt on a table) as he slit Silver St. Cloud's throat. 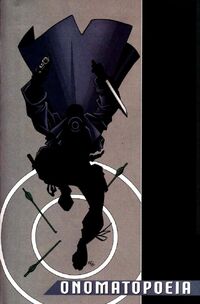 When I did Green Arrow, I went with Onomatopoeia for a villain, just because I loved that word, and it kind of formed the character inasmuch as he would say sounds out loud. It only kind of works – I think – on a comic book page because if you have a gun going off, they usually write BLAM! and then you can have, you know, the character saying "BLAM!" in a word balloon, but like if you tried to do that cinematically you can't really rock it. A gun in a film sounds completely different. It doesn't read as BLAM! and so to have a dude say BLAM! after a true gunshot, all these people would be like "he's just retarded." I think it works great in print and on a comic book page. I don't think that character would translate very well outside of that.