Orion was able to obtain the Anti-Life Equation (the source Darkseid was in search of). He then went to Apokolips and confronted Darkseid about his birth, and ended up fighting for control of Apokolips (he refused to use the Anti-Life Equation due to issues of pride and earning his destiny unaided). He defeated Darkseid and gained control of Apokolips. With the anti-life equation, Orion went to Earth to begin creating intergalactic peace. He turned Earth into a utopian like world that began disrupting the balance of the universe. It was revealed that Darkseid, along side Metron, allowed Orion to defeat him, so he could understand the potential of the anti-life equation. Orion was later forced to give up the power of the anti-life equation and decided it was for the best because his use of its powers violated the principles of free will and was equitable to tyranny.[1]

During part of his investigation into the disappearance of several metahuman children, Dan Turpin came across a dying Orion, babbling about a "war in heaven". Seeing Turpin, the Dog of War cried that they didn't die, and he was within all of them. His last words were for Turpin to fight, and then Orion died.[2] Following this, Green Lantern John Stewart discovered a Radion bullet buried in fifty year old strata, which he theorized was used to kill Orion but he was later resurrected on earth, along with the rest of the New Gods.[3] 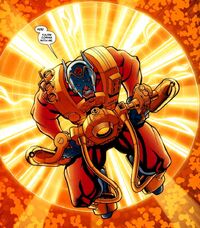 Retrieved from "https://dc.fandom.com/wiki/Orion_(New_Earth)?oldid=2375577"
Community content is available under CC-BY-SA unless otherwise noted.