Whatever Penguin might be, he's anything but a buffoon. He plans his crimes with military precision. His thinking is brilliant-- circuitous and multi-leveled. His appearance makes you want to underestimate him, but don't fall into that trap. - His major fault is his massive ego. He thinks he's as physically adept as he is intelligent. If he allowed able-bodied henchmen to commit his crimes rather than trying to do it himself... our job would be far more difficult.

The Penguin is a fancy criminal and self-styled entrepreneur, who uses his business as a front to cover his criminal activities. Penguin started as many criminals in Gotham City, by performing crimes with a specific theme surrounding birds. Eventually, Penguin outgrew his hands-on crimes and became the mastermind of organized crime in Gotham, making him a valuable asset for both criminals and heroes alike.

Born Oswald Chesterfield Cobblepot, the Penguin was bullied as a child for his short stature, obesity, and beak-like nose. These traits made him an outcast in his rich, high society family; their rejection drove him to become a criminal. When Penguin was a young child, his father died of pneumonia after being drenched in a downpour. Because of this, his mother became over-protective and forced him to carry an umbrella whenever he went outside — even on sunny days. In keeping with his family's tradition of wealth, the Penguin lives a life of crime, yet executes it with his own self-proclaimed class and style.

Unlike most of the villains in Gotham, the Penguin is a gentleman villain, in control of his own actions and perfectly sane, features that serve to maintain a unique relationship with his archenemy, Batman. During the early days after Batman's appearance, Cobblepot joined Harvey Dent AKA Two-Face, and several other Gotham criminals to bring down the crime family led by Sofia Falcone. Cobblepot was only with the group very briefly and was arrested after a firefight at the docks with Tony Zucco and Eddie Skeevers.

Later, Penguin managed to get a hold of a lethal drug developed by Ra's al Ghul, but his plans of spreading it in Gotham and use it to blackmail the city were stopped by Batman and Talia, Ra's' daughter.[2]

The Penguin attempted to steal rare falcons from the Gotham University, but his plan was thwarted by Batman and he was arrested.[3] When he was released on parole, he claimed to have fallen in love and gone straight. His new girlfriend wouldn't tolerate criminal behavior. Cobblepot ran a legitimate umbrella factory staffed by ex-cons, but he was sent back to prison because this counts as "consorting with known felons."[4]

Much later, Amanda Waller recruited him to the Suicide Squad for one mission, in exchange for prison release. Penguin helped them plan a top secret mission where they rescued imprisoned author Zoya Trigorin from the Soviet Union. He was forced to accompany them behind enemy lines, because Rick Flag wanted him to have a stake in his own plans.[5] They were forced to fight the Russian army, and Penguin was nearly killed.[6] In the confrontation, Penguin realized Russia is not an appropriate country for him or his criminal activities and after a deadly mission, they escape the country.[7]

Upon returning to Gotham, Penguin returned to prison, where he met Mortimer Kadaver. While in prison, they came up with a breakout plan and it all started with Penguin's sudden death. The Penguin was buried after his fake death, thanks to Kadaver who used hypnosis to send Penguin into a death-like trance.[8] His henchmen released Penguin from his tomb and once he was revived, he was forced to accept Kadaver into his gang and they started a crime spree. Eventually, Penguin double-crossed Kadaver and shortly afterwards, he was stopped by Batman.[9] 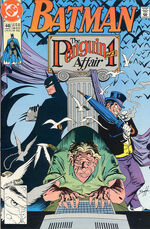 Penguin soon arranged his own escape from prison and located Harold Allnut, a mechanics and engineering genius who Penguin manipulated to create a bird controlling device. Harold's machine allowed Penguin to control large flocks of birds with microwaves, forcing the animals to create chaos and destruction in Gotham.[10] Penguin's intention was to sell the machine to international criminals and kill Harold afterwards, but part of his plan was also the kidnapping of a notorious actress, with whom Penguin had become infatuated. Using the bird device, Penguin kidnapped the actress and attacked Batman in the Batcave.[11] However, as he was selling the invention to other criminals, Penguin's plan was thwarted by Batman, who had deduced the device's mechanism, and Harold himself, who turned against Penguin, allowing Batman's ultimate victory over Cobblepot.[12]

A short time later, Penguin realized that hands-on crime was the cause of his downfall and as a way to avoid being stopped again, he decided to "go legit". As part of his new plan, he found a way to manipulate the stock market and gave the information to a large company, earning the company millions of dollars. Penguin required a large part of that money for himself in order to keep providing information on the stock market. Penguin's plan was foolproof, but he found himself missing the excitement of revealing himself as the mastermind of the crimes and ended up in prison once again.[13]

Penguin eventually established himself as a legitimate businessman in charge of his nightclub, the Iceberg Lounge. However, it was just a facade in order to control criminal activities from a privileged position.[14]

After a while, Penguin organized a large criminal ring that consisted on kidnapping pregnant girls and sell their kids to adoption. However, Penguin was attacked by a strange villain and the penthouse of the Iceberg Lounge was bombed when his crime was revealed.[15]

Penguin survived the explosion and learned that the people behind the attack were a new group called The Body. Penguin then gathered three helicopters and attacked a large group of members of The Body, saving Batman in the process. Before leaving, Penguin warned Batman about the new enemy.[16]

When the great gang war broke out in Gotham, Penguin auctioned weapons he stole from the US Navy,[17] as well as meta-humans and assassins among the many gang parties in Gotham. During this time, Penguin was confronted by Hush, who was looking for Riddler.[18] Shortly after, Gotham was drowned in chaos and the police ordered a civil curfew for the entire city. Penguin took control of the Gotham Power Company and caused a massive blackout in the city.[19]

The Penguin becomes swept up in the events of Infinite Crisis. He is part of the Battle of Metropolis, a multi-character brawl started by the Secret Society of Super Villains. The Penguin, along with several other villains, are bowled over by the surprise appearance of Bart Allen.

While the Penguin was away from Gotham City, the Great White Shark and the Tally Man killed many of the villains who worked for the Penguin (including the KGBeast, Magpie, Orca and the Ventriloquist), and framed Harvey Dent. The Shark had planned to take over Gotham's criminal syndicate and weaken all his competition - Penguin included. Upon his return to Gotham, the Penguin continues to claim that he has gone "straight" and reopened the Iceberg Lounge nightclub, selling overpriced penguin merchandise. He urges the Riddler to avoid crime, as it's more lucrative in their current, non-criminal lifestyle.

When Batman disappeared from Gotham, Penguin was the first target of the vigilantes of the city.

Robin talked to Penguin and offered a large amount of money in exchange of information about Batman's whereabouts.[21] Shortly after, Penguin showed Robin a picture proving that Batman was alive but somehow insane.[22] Some days later, Batgirl attacked Penguin in order to learn Batman's location, but Penguin knew nothing about it. Furthermore and due to her aggressive attack on him, Penguin ended his partnership with Batman.[23]

A few days later, Penguin was pleased to let the meta-human criminals of Gotham get rid of Intergang for him. Penguin even applauded Man-Bat after he massacred some men of Intergang, who had been using the Iceberg Lounge as a meeting point.[24]

After the death of Batman, Penguin became one of the main crime lords in Gotham. Around this time, Penguin was informed that someone had damaged Two-Face's crime ring and he was taking the blame for the hit.[25] When Penguin learned that the responsible was a new Black Mask, he hired Riddler's service as a detective to find the criminal. However, Black Mask struck first by sending Firefly to kill Penguin, but the pyromaniac was stopped by Catwoman. Penguin's forces were weakened but the crime lord emerged unscathed.[26]

Some time later, word about Vicki Vale's discovery of Batman's secret identity was spread in the underground of Gotham and Penguin started looking for the reporter to capture her. When a couple of amateur criminals wanted to join Penguin's crew, he sent them to kidnap Vale and bring her back to him, but they failed miserably.[27]

During a meeting with members of the Penitente drug cartel, the Penguin was attacked by Red Hood who nearly killed Cobblepot and Gabriel Santo.

Penguin and Gotham were taken by Brainiac and Telos and were trapped for a year. Cobblepot attempts to force Ivy to work for him, but he is foiled by, Batman, Robin, Red Hood and Scarlet.

Retrieved from "https://dc.fandom.com/wiki/Oswald_Cobblepot_(New_Earth)?oldid=2782534"
Community content is available under CC-BY-SA unless otherwise noted.