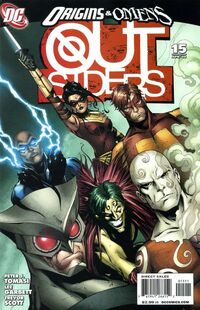 Outsiders (Volume 4) is an ongoing series that is a continuation of Batman and the Outsiders (Volume 2). It began a complete rebooting of the team under the new jurisdiction of Alfred Pennyworth (after Batman disappeared during Final Crisis), containing a completely new team membership Batman had instructed to be together in the event of his death. The team consists of the original Outsiders roster plus Owlman and The Creeper. The series is again titled Batman and the Outsiders for the final issue of the series.

Retrieved from "https://dc.fandom.com/wiki/Outsiders_Vol_4?oldid=2458407"
Community content is available under CC-BY-SA unless otherwise noted.