Peacemaker is Christopher Smith, a superhero and soldier who loves peace so much, he's willing to kill for it. Originally he was a pacifist diplomat who used strictly non-lethal weapons, although over time he developed into a more violent vigilante willing to make sacrifices for the greater good. His mind was warped by his abusive father at a young age, and he often flits between being a hero, a villain, or something in between. The character has been associated with the Suicide Squad, Checkmate, the Shadow Fighters, League Busters and Living Assault Weapons. Peacemaker was created by Joe Gill and Pat Boyette, originally published by Charlton Comics in Fightin' 5 #40. (1966) 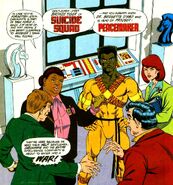 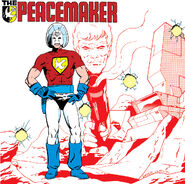 The Comedian
Watchmen
(other versions) 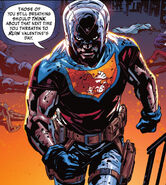