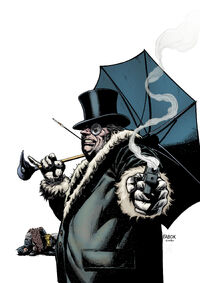 I'm Cobblepot, you cretin. Do you think my parents named me "The Penguin"?

Penguin is one of Gotham City's most notable criminals and thus, one of Batman's greatest foes. Oswald Cobblepot was born with physical features that resemble that of a penguin, a reason why he would adopt the "Penguin" moniker. Penguin debuted as an eccentric and highly skilled thief, who would always look for ways to make some profit and avoid being captured by Batman. Later on in his career, he would fancy himself as a legitimate businessman who runs the infamous Iceberg Lounge. However, his businesses are never quite legitimate and he would always have a part in all of Gotham's criminal activities.

Using trick umbrellas and important connections all over the criminal underworld, Penguin is part of Batman's rogues gallery. A highly dangerous enemy and a very powerful ally, makes of Penguin a menacing force in Gotham.

Retrieved from "https://dc.fandom.com/wiki/Penguin_Recommended_Reading?oldid=2485006"
Community content is available under CC-BY-SA unless otherwise noted.