I steer, but I cannot lead. That has always been my fate.

The Phantom Stranger is a mysterious figure in the history of the world. His origins, nature, even his name, have never been revealed.

Various stories about his origins exist, including: 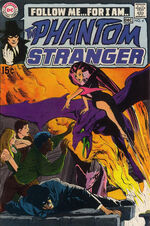 Early in his career, the Phantom Stranger would expose supernatural events as hoaxes, saving many victims in the process.[3] This drew the attention of ghost breaker Dr. Thirteen, who became determined to prove The Stranger was merely a con artist.[4][5] Due to Thirteen's perseverance, Phantom Stranger was forced to work alongside him on more than one occasion to solve mysteries and uncover hoaxes.[6][7][8]

However, when the evil demoness Tala was unleashed on Earth, the Phantom Stranger had to make use of his mystical powers for the first time to contain Tala and counter her evil spells.[9] After their first encounter, Stranger confronted Tala on other occasions and he thwarted her evil plans,[10][11][12] although her true intentions were confusing at times as she would often assist the Phantom Stranger.[13]

Eventually, Stranger and Thirteen came in conflict against the immortal alchemist called Tannarak and Stranger had to face this new enemy on more than one occasion.[14][15] Having dealt with most of his supernatural enemies and without Thirteen to meddle in his activities, Phantom Stranger continued his activities as an agent of the unknown[16] while also assisting other heroes like Batman.[17] 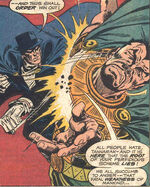 After this victory, the Phantom decided to stay close to Cassandra as to protect her and fight evil together,[20] and soon, they were joined by their former rival, Tannarak.[21] However, their alliance didn't last long as Tannarak apparently perished during the battle that defeated the Dark Circle and afterwards, the Phantom Stranger tricked Cassandra into thinking he also died, so that he could continue his solitary quest[22] in which he resumed his adventures as a mysterious aid to people in need[23] and also confronted different kinds of evil.[24] In one of these adventures, he came across Dr. Thirteen once again and the strange entity known as the Spawn of Frankenstein.[25]

The Stranger soon confronted the evil Dr. Seine[26][27] and stopped him for good with the asssistance of Deadman.[28] After this, The Phantom Stranger was reunited with Cassandra Craft, at long last.[29]

The Phantom Stranger played a major part in guiding Tim Hunter through time to show him the history and nature of magic.[30] He has assisted the Justice League on numerous occasions, even being formally elected to the group.[31] The Stranger also tried to foil Eclipso's plan to cause a nuclear war.

He also attempted to prevent Hal Jordan from uniting the resurrected body of Oliver Queen with his soul in Heaven. This earned him Jordan's wrath; indeed, the Spectre threatened to judge the Stranger to see whether God had "punished" him properly by refusing him access to Heaven itself. Nonetheless, the Phantom Stranger has assisted Hal Jordan during his tenure as the Spectre on numerous occasions as well, most notably in a short stint babysitting Hal's niece, Helen.

During the Day of Vengeance, the Stranger had been turned into a small rodent by the Spectre. He was still able to advise Detective Chimp, who sheltered him in his hat while he recovered his powers. He changed back using recovered energies and aided the Shadowpact, allowing them to see the battle between the Spectre and Shazam.[32] That makes a point that the supernatural community generally regards the Phantom Stranger as invincible. The first reaction of some people to the Spectre's assault on magic is simply to presume that the Stranger will take care of it. Other adventures have shown the Stranger nearly as powerful as the Spectre. This however, is a recent interpretation. While others have never considered the Stranger as an easy foe to combat, given his unknown abilities, they also never considered him as invincible.

The Phantom Stranger's relationships with the other mystic heroes are usually a bit tense. The Stranger has no qualms gathering various forces in order to combat a certain evil (the Sentinels of Magic, but also other loose outfits), often invading those people's personal lives. However, he does not usually extend them that same courtesy. The Phantom Stranger has resisted such people as Doctor Fate (notably Hector Hall) in this, although Fate is in almost any incarnation an ally of the Stranger. Despite this, he does get along well with Zatanna; he appeared by her side to help remove the influence of Faust on Red Tornado.[33]

Since he is ultimately an unpredictable force, others often meet the Phantom Stranger's appearance with distrust. Nonetheless, most heroes will follow him, seeing not only his immense power, but also knowing that the Stranger is in the end, a force for good. Notable though is Madame Xanadu, who has refused to join the Stranger on a few occasions, although she is a member of his Sentinels of Magic.

The Stranger also holds a unique relationship with the Spectre, as the two forces often come into conflict. He was responsible for gathering a group of mystic heroes in order to combat the Spectre, when its human host Jim Corrigan seemingly lost control of the Spectre. (It was during this time that they destroyed the country of Vlatava.) The Phantom Stranger participated in Jim Corrigan's funeral, when Corrigan's soul finally earned its rest and left the Spectre. The Stranger subsequently became one of the forces that stood against the Spectre when it went on a rampage without its human host, until the soul of Hal Jordan bonded with it. The Stranger occasionally took on an advisory role for this new Spectre. Aware that the Spectre now has yet another new host, the Phantom Stranger gathered a large group of magic wielders and mystics, including Nabu, Zatanna, and the Shadowpact, in an unsuccessful attempt to solicit the Spectre's assistance in the Infinite Crisis and later reforming the Rock of Eternity.[34][35]

The Stranger wears an amulet around his neck but its magical properties—if any—have never been revealed. The Prime Earth equivalent wears 30 pieces of silver around his neck.

Retrieved from "https://dc.fandom.com/wiki/Phantom_Stranger_(New_Earth)?oldid=2866417"
Community content is available under CC-BY-SA unless otherwise noted.