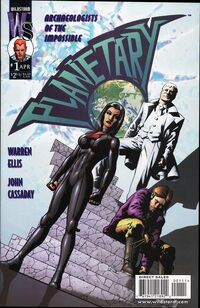 Planetary is an American comic book series created by writer Warren Ellis and artist John Cassaday, published by WildStorm Productions, an imprint of DC Comics. Planetary also refers to the group portrayed in the series. Planetary was previewed in the September 1998 issues of Gen¹³ (#33) and C-23 (#6), and issue #1 was cover-dated April 1999. It was originally intended to be a 24-issue bi-monthly series. However due to illness of Ellis and other commitments by Cassaday, the series was put on hiatus between 2001 and 2003; it has since restarted and concluded with issue #27 in October of 2009.

Retrieved from "https://dc.fandom.com/wiki/Planetary_Vol_1?oldid=2257462"
Community content is available under CC-BY-SA unless otherwise noted.