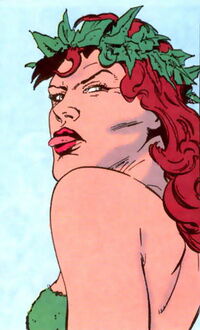 Did you know that these books are made of trees?

Poison Ivy was a former botanist, who suffered a terrible accident which caused her body to change. Ivy acquired an immunity to all natural toxins and diseases. However, the accident left her mentally scarred as well and she developed a hatred towards mankind, especially against men. Her new powers, combined with her new ideas, turned Ivy into an eco-terrorist, capable of creating complex plans to damage people in favor of nature. Ivy would normally try to gain profit from rich people who damage the natural environment, but at times she has been known for trying to reach a balance between humans and nature. Most recently, Ivy's powers have expanded: her skin turned green and she was able to control large mutant plants of her own creation.

Despite her attractive nature, Ivy is a very dangerous enemy and has caused Batman all kinds of troubles. Sometimes working as a force of good, but most times working to destroy Batman's patriarchy; Ivy's ultimate goal is to free the Earth from humanity and restore nature's rightful position.

Retrieved from "https://dc.fandom.com/wiki/Poison_Ivy_Recommended_Reading?oldid=2195443"
Community content is available under CC-BY-SA unless otherwise noted.