Pol Manning is a hero of the 58th Century with changing personas. Originally he was the Green Lantern named Hal Jordan, called forward through time by the Solar Council to deal with a crisis. The time travel affected his memory, and a Council member named Iona Vane created the fictitious "Pol Manning" identity. Jordan eventually realized this deception, and they implanted a clone with Pol Manning's identity instead. During another crisis, Salakk was called forward and implanted with the Manning identity. Eventually he broke free of it, but decided to remain in that century as a hero. This timeline was seemingly erased during Zero Hour. Pol Manning was created by John Broome and Gil Kane, first appearing in Green Lantern (Volume 2) #8. (1961) 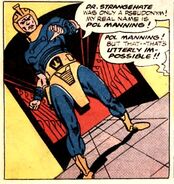 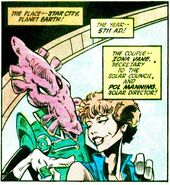 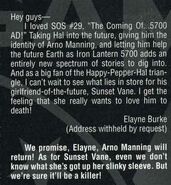