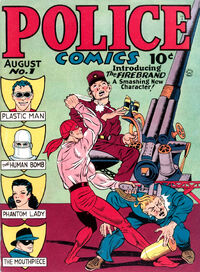 Police Comics was an anthology series published by the defunct Quality Comics. The series is significant for the introduction of the elastic super-hero Plastic Man, as well as several more super-heroes who were later gathered together as the Freedom Fighters. Since being acquired by DC Comics, many of the Quality line of characters have been retroactively allocated to the Pre-Crisis reality known as Earth-X. Some however, have been displaced into Earth-Two and Earth-S continuity, while others remain in limbo having never been seen again since 1953. Plastic Man is one of the more enduring heroes of the title, and in terms of continuity, has literally stretched across the Multiverse. Incarnations of the character have existed on Earth-X, Earth-Two, Earth-One and the modern-era New Earth (as well as his own short-lived animated series).

Retrieved from "https://dc.fandom.com/wiki/Police_Comics_Vol_1?oldid=2773588"
Community content is available under CC-BY-SA unless otherwise noted.