Psi is Gayle Marsh, a powerful psychic who has been both an enemy and an ally of several incarnations of Supergirl. She has been a member of the Suicide Squad, Council and Black Lantern Corps. Gayle wields powers of telepathy, telekinesis, teleportation, energy manipulation and more, but her powers come with the drawback that she can't filter out other people's thoughts and emotions. Psi was created by Paul Kupperberg and Carmine Infantino, first appearing in Supergirl (Volume 2) #1. (1982) 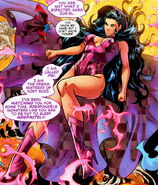