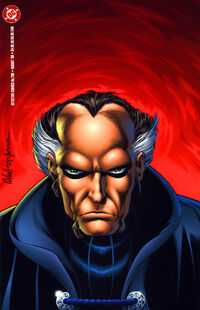 Thank you for your attention. You may now panic.

Ra's al Ghul is an international eco-terrorist that commands an incredibly large army of trained people under the name of League of Assassins. Ra's has managed to overcome death and has lived longer than any human thanks to the use of a mysterious natural phenomenon known as Lazarus Pit, which restores the youth and health of any person that uses it at the expense of temporary insanity. Due to his long lifespan, Ra's has adopted the philosophy of eliminating the majority of the human kind for the greater good of the planet. His destructive plans were always disrupted by Batman, the only person capable to match Ra's own intellect and skills. Because of this, Ra's tried to made Batman the rightful heir to his empire by marrying him to his own daughter, Talia al Ghul, but failed every time as his goals are too far apart from Batman's principles.

Ra's holds great respect for Batman and his allies, as he knows their secret identities, but he chooses not to spread the word, following his own sense of honor. His intellect, knowledge, fighting skills and determination to save the planet from mankind, make him one of Batman's deadliest opponents.

Retrieved from "https://dc.fandom.com/wiki/Ra%27s_al_Ghul_Recommended_Reading?oldid=2266160"
Community content is available under CC-BY-SA unless otherwise noted.