Rampage is Karen Lou "Kitty" Faulkner, a brilliant S.T.A.R. Labs scientist whose experiments with solar power led to an accident that allowed her to absorb solar energy through her skin. This also made her physically much larger. Kitty is timid and intellectual, while her alter-ego Rampage is aggressive and brutal. In her early appearances she was an enemy to Superman, but he enabled Rampage to control herself and revert to Karen Faulkner. In later stories she becomes Superman's ally. Rampage was created by John Byrne, first appearing in Superman (Volume 2) #7. (1987) 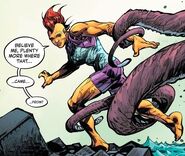 Retrieved from "https://dc.fandom.com/wiki/Rampage?oldid=2938583"
Community content is available under CC-BY-SA unless otherwise noted.