My mind is a battleground, whipped and ripped asunder, torn from the very fabric of reality.

Raven, also known as Rachel Roth, is a superhero with magical abilities and a prominent member of the Teen Titans. Raven is a tele-empathetic, she can teleport, and send out her Soul-Self, which can fight physically, manifest as a force field, manipulate objects and others as with telekinesis, as well as act as Raven's eyes and ears away from her body.

Raven was born the half-breed daughter of a human mother named Angela Roth and the demon overlord Emperor Trigon. She was conceived when her mother ran away from home and joined a cult, which then summoned the demon lord Trigon, who raped her.

Angela Roth, going by Arella, retreated to an alternate dimension where Raven was born and raised in the pacifistic reality called Azarath. Growing up, Raven was taught to "control her emotions" by the Azar and the Azarathian monks in order to suppress and control her inherited demonic powers.

Eventually she learned that Trigon was planning to come to her dimension and vowed to stop him. She initially approached the Justice League, but they refused her on the advice of Zatanna who sensed her demonic parentage. In desperation, she reformed the Titans as the New Teen Titans to fight her father.[1]

The team was eventually able to defeat Trigon and seal him in an inter-dimensional prison.[2] However, Raven still had to fight her father's influence, as he was not completely destroyed. More than once, Raven nearly lost control in various high stress situations in her adventures and barely regained it before Trigon could reassert himself. Compounding the problem was the death of Azar, who had by now passed away from old age and Raven was left bereft of her support.

Trigon eventually escaped, came to Earth and over the course of the next few months, slowly took control of Raven, eventually corrupting her completely. Trigon's demon army invaded Azarath and it was destroyed, despite the Titans best efforts to save it. The Titans pursued them back to Earth, only to find it was almost completely subjugated under Trigon's will. The Titans came together and killed Raven. This allowed the souls of Azarath to possess her and use her as a channel to kill Trigon. Afterward, Raven was presumed dead, but she actually rose from ashes of the battle, finally purged of Trigon's evil. She vanished, and her mother went looking for her.[3]

Raven was then captured by Brother Blood's minions to control Nightwing as part of Brother Blood's resurrection. The Titans rescued them both and prevented Brother Blood from returning. Raven donned a new white cloak to represent her being free from her father's influence.

Later, another version of Raven appeared, this time possessed by her evil conscience. She attempted to implant seeds of Trigon's children into new bodies. She crashed the wedding of Dick Grayson and Koriand'r of Tamaran, and implanted one of the seeds into the alien princess. However, she actually implanted the seed of the good Raven, which caused Starfire to leave Earth in order to escape from the evil Raven and go on a spiritual journey. Raven then implanted seeds into several superheroes. The Titans were able to defeat her with the help of Phantasm.

Raven returned later, still evil, in order to destroy her good self which she had implanted in Starfire. The Titans defeated her once again, for the last time. The good Raven was instilled into a new golden spirit body. 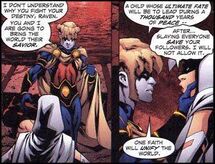 As a spirit, Raven wandered Earth, looking for her place in the world, when Brother Blood came to claim her. Her spirit was instilled into the body of a teenage girl by the Church of Blood. The Teen Titans (reformed again), discovered that the Church of Blood were worshipers of Raven's father, Trigon. They also found a prophecy which told of the marriage between Brother Blood and Raven that would result in Armageddon. The new team interrupted the wedding, and Raven forced the cult to escape. She then joined the new Teen Titans and enrolled at a high school as Rachel Roth to honor her mother.

Later, she was attacked by the villain Kestrel. When Hell's gates were broken, Brother Blood escaped along with his newly appointed mother, Lilith Clay (formerly known as Omen). Hawk and Dove, Kole, and Phantasm also returned from the grave.

Raven has recently become romantically attached to Beast Boy. Raven had been developing feelings for him since her recent rebirth.

Due to the effects of the Spectre's destruction of magic, Raven found her own magical powers weakening and slipping out of her control, but continued on the good fight nonetheless, helping the Titans both in evacuating the shattered city of Blüdhaven and battling Superboy-Prime.

After the events of Infinite Crisis, Raven quit the team after she and Beast Boy broke up their relationship. A recording of her told Cyborg that Beast Boy was stressed by being team leader, and even compared him to Nightwing. Raven then left the Titans because she learned a secret about the new members of the team, though she let them think she was leaving because of Beast Boy.

Raven traveled around the globe, looking for something that had been stolen from Titans Tower by one of the many members the team had seen in the previous year. She based her operations out of an apartment in Beijing, and met with Red Star briefly in Moscow to ask the Russian hero questions about their former teammates. She was able to recover a book, but this action resulted in her being chased by a squadron of armed soldiers. She eventually made her way back to the United States where she reached the Church of Brother Blood. The book that she had in her possession contained a computer disk, which housed the spirit of her old colleague, Jericho. Raven was able to withdraw Jericho's soul from the disk and transpose it into a resurrected body.

Raven was later approached by Robin and Wonder Girl, in the hopes that she could resurrect Superboy like she did Jericho. Unfortunately, Raven declares that impossible since Superboy's soul had moved on to the afterlife, while Jericho's soul was kept on a computer disk. Without warning, the Titans were captured by the villainous Titans East and transported to the original Titans Island in New York, where Raven was placed in the 'care' of Enigma and Duela Dent, who took to torturing her psychologically. Raven managed her escape by offering Duela membership into the true Titans group. After knocking Enigma and Risk unconscious, Raven, Duela, and Cyborg got reinforcements in the form of Nightwing, Troia, Beast Boy, and Flash (Bart Allen). After beating the Titans East, she revealed hints that she still loved Gar, but he refused to dwell on the matter, leaving their relationship uncertain at the moment. 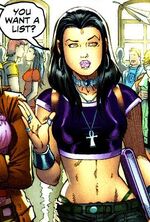 Raven and a group of classmates were attacked by a demonic creature, sent by Raven's resurrected father Trigon. She soon joined Beast Boy, Donna Troy, Red Arrow, Starfire, Flash and Nightwing at New York's Titan's Island where Cyborg and his Teen Titans team were attacked by Deathstroke and the villainous Titans East. These events lead to the creation of the newest team of Titans, which consists of the original New Teen Titans.

Raven discovered that Trigon had more than one child, and that a trio of children devoted to her father are behind the attacks. She was affected along with many of the other Titans by these three beings, who preyed on the strongest emotions present in the group at the time (such as Nightwing and Starfire giving in to long suppressed longing for one another, and Flash and Donna Troy's mild envy taken to extremes in a usually calm social interaction). For Raven and Beast Boy, the emotion used against them was their subdued rage and insecurity towards themselves and each other. Raven was attacked at one point by an incensed Garfield, but their fight was broken up by the remaining Titans when they begin to gradually recover from the attack. Raven's three half-brothers then used her and Beast Boy to act as keys to open a portal to Trigon's realm. Raven used her own power to influence greed in others to make her half-brothers steal what little power Trigon had left. The portal was closed, and Trigon's sons, believing they had gained great power, left the scene. 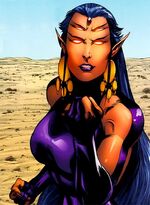 The Sin of Pride

While Raven and Beast Boy went out together on a "not-a-date", she informed him that since meeting her half-brothers, she's felt herself being tempted by her father's evil power and fears she will once again turn evil. Although Beast Boy rejected the idea, Raven's fear was made reality, as her half-brothers later returned, and provoked her demonic side, causing her to leave the Titans and join them. However the team was able to track them down and convince Raven to join the side of good once more with the help of a mystical artifact Raven gave Donna Troy should such a situation ever arise. She later provided a number of other artifacts, all capable of killing her, to the Titans as terms for her staying with the team. However, the experience played a hand in Raven ultimately electing not to pursue a renewed relationship with Beast Boy.

Raven aided the Titans in capturing Match, who went on a rampage with Jericho trapped inside of him. Through her powers, she discovered that Jericho was actually in control of Match, not the other way around. Before she could warn the other Titans, Jericho used a device to temporarily knock out the lights. When the back-up generator kicked in, Jericho was gone, and Nightwing deduced he must have possessed one of the Titans in the confusion.

In the final issue of this incarnation of the Titans, Superboy-Prime and his Legion of Doom attack Titan's Tower. Raven stops Kid Flash just before he can kill Inertia. Then she reveals her soul-self to Headcase, terrifying and defeating him. After the Legion of Doom is defeated and Superboy-Prime is bound to the Source Wall, Beast Boy and Raven have a talk about her difficulty in reading Solstice's emotions, and their encounter with Headcase. Eventually, Raven starts to open up about her true feelings. While it was her inner darkness that scarred her entire life, she was even more frightened of what her love for Beast Boy might cause her to do. Beast Boy makes it clear he doesn't want to escape from any part of her. Touched, Raven decides that she needs to embrace the positive feelings inside her rather than just her negative ones. Beast Boy assures her this is part of being human, and points out, "I think you've worried enough about the bad....so why don't we focus on the good for a change?" With that, they share a heartfelt kiss to renew their relationship and ultimately embrace their love for each other.

Retrieved from "https://dc.fandom.com/wiki/Raven_(New_Earth)?oldid=2865416"
Community content is available under CC-BY-SA unless otherwise noted.