Atrocitus' first discovery of the red spectrum came during the years of incarceration he endured on the prison planet of Ysmault. He blames the Guardians of the Universe for the massacre of his sector, and because of this Atrocitus built up years of hatr

With blood and rage of crimson red, ripped from a corpse so freshly dead, together with our hellish hate, we'll burn you all, that is your Fate!

Atrocitus' first discovery of the red spectrum came during the years of incarceration he endured on the prison planet of Ysmault. He blames the Guardians of the Universe for the massacre of his sector, and because of this Atrocitus built up years of hatred and rage. When he gave in fully to his rage, it was given shape for the first time when he bludgeoned Qull to death, one of his fellow survivors, with a Red Lantern Power Battery.[1]

After that, Atrocitus apparently killed the other Inversions, using their blood as part of his plans. He then poured forth the great bloody rage drawn from his body by the power of the red spectrum. Using blood magics he forged a Red Lantern Central Power Battery of his own which stands before a great lake of blood, and from that Lantern emerged batteries and rings to power the Red Lantern Corps. In the shadow of the great Red Lantern, immersed in his victims blood, Atrocitus vowed revenge against the Guardians of the Universe and Sinestro, the "Greatest of the Green Lanterns" and the one who incarcerated him.[2]

Atrocitus began sending Red Lantern rings across the universe, hoping to raise an army and destroy his jailers. Among those who received a ring were Vice, the most ruthless of the Corps, Dex-Star, a feline alien, Bleez, a woman who had been tortured and raped by the Sinestro Corps on Ranx the Sentient City, and Laira, a disgraced former Green Lantern. However, upon accepting the rings, their hearts were rendered useless and spoiled the blood from within, causing them to expel it in violent manner that burned anyone who touched it. Additionally, the Red Lanterns were reduced to an almost animalistic state, with only Atrocitus appearing to be in full control of himself. Once Atrocitus assembled a sufficient force, the Red Lanterns went to capture Sinestro, who was being transferred to Korugar for his execution. At the same time, the Sinestro Corps launched an ambush on the Green Lantern escort to rescue their leader, only to be in turn ambushed by the Red Lanterns. They killed any Green Lantern or Sinestro that stood between them and Sinestro, finally taking Sinestro and a number of his corps captive. Their mission complete, Atrocitus ordered the Red Lanterns back to Ysmault.[3]

Returning to Ysmault, Atrocitus had Sinestro bound and tied to a giant Red Lantern symbol, as he began torturing him, Atrocitus vowed to use his blood to form new Red rings for his Corps. He would then use those new rings to help destroy Korugar, the Sinestro Corps, and the Green Lantern Corps. Sinestro was not intimidated. Further incensed that he was unable to frighten Sinestro, Atrocitus used the heart of a dead Sinestro Corps member to learn his enemy's secrets. The ritual showed the truth to Atrocitus, who vowed to destroy the one thing which Sinestro had hidden from all others—his daughter.[4] 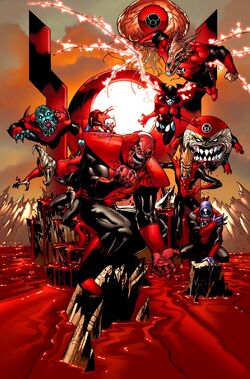 Soon, Hal Jordan and the Blue Lantern Corps arrived to rescue Sinestro. Atrocitus and the Red Lanterns ambushed Jordan, which were soon joined by the survivors of the Sinestro Corps trying to free their leader. Though the Blue Lanterns were able to drain the power from the Yellow Power Rings and begin calming some of the Red Lanterns, Atrocitus roared that he knew their weakness. Sinestro soon killed Laira as Jordan was getting through to her, driving him to a rage and try to kill his former mentor. A Red Ring soon attached to Jordan, bringing him under Atrocitus' control and revealing the Blue Lanterns weakness. The power of hope may be extraordinary, but it is nothing without the willpower to make it happen. Revealing that Blue Lanterns need an active Green Lantern and Green Lantern Ring to tap into their power. Saint Walker placed a Blue Lantern Ring on Jordan, neutralizing the toxic effects of the Red Ring and destroying it. Sinestro and his Corps escaped in the chaos, leaving Atrocitus and the Red Lanterns to flee to the other side of Ysmault, where he intended to locate the homeworld of the Blue Lantern Corps and neutralize the threat they presented.

Following the end of the Blackest Night, Atrocitus accompanied by Dex-Starr joined the New Guardians in search of the Emotional Entities with promise of finding and executing the true perpetrator behind the Massacre of Sector 666, the former Guardian Krona. The search led Atrocitus to finding the Rage Entity, the Butcher, within a man witnessing the execution of his daughter's murderer, and successfully warded the entity into his power battery. Upon returning to the other New Guardians, they were attacked by Krona himself, who then captured the Butcher and the other entities and claiming them for himself to use them in controlling the Guardians of the Universe and Green Lantern Corps. Atrocitus was entrapped in the Book of the Black and was denied his chance to kill Krona due to Hal Jordan.