Red X is a mysterious thief with a unique connection to Robin and the Teen Titans. Originally, Robin created the identity of Red X to go undercover and get closer to Slade. However, Robin didn't share his plan with his teammates, causing a breach of trust between them when Red X's identity was revealed. The costume would eventually be stolen by a mysterious thief who became the new Red X, an enemy of Robin and the Titans alike.

Red X (Robin's disguise) debuted in the Teen Titans TV series episode Masks (2003), written by Thomas Pugsley and Greg Klein. Red X (as a separate character) debuted in the episode X (2004), created by Ben Jones and David Slack. Red X made his debut in mainstream comics in Future State: Teen Titans #1 (2021) as part of the possible future event Future State. The character was adapted by Tim Sheridan and Rafa Sandoval. 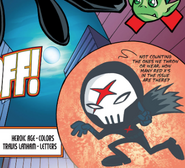 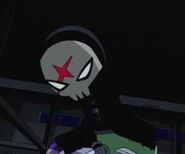 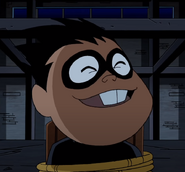