Mother birds usually know when to let their Robins leave the nest. He's a big Boy Wonder now - a Man Wonder, in fact.

Dick Grayson was the first sidekick of Batman. After a falling out, he set out on his own as Nightwing, though he later reconciled.

Together with his parents, Dick Grayson was a circus performer for Haley's Circus. After Haley refused to pay protection money to Tony Zucco, the mobster sabotaged the rig the Flying Graysons were about to use. Dick, and the entire crowd with him, watched as the line broke and his parents fell to their deaths. Dick was taken in by Bruce Wayne, who was present during the fatal show. It wasn't long before Dick struck out in order to find Zucco. In the process, he also found out his guardian was in fact Batman. He became the Dark Knight's sidekick, Robin.

The adventures the two had put a strain on his emotions, however. He became more and more frustrated by the stubbornness of his partner. This culminated in Robin resigning after he found out his girlfriend, Barbara, was Batgirl, and Batman had known for some time. Grayson left Gotham City to travel the world on his own, much like Bruce Wayne did in the years before he became Batman. While living abroad, Dick studied many different crime fighting techniques and re-examined his feelings about taking up the role of Robin again when he returned to Gotham. He eventually realized he had outgrown the role of Batman's trusted kid sidekick Robin, and set about developing a new heroic identity all his own. 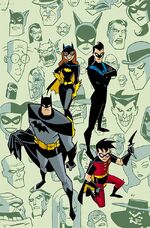 When Dick returned to Gotham, he moved out of Wayne Manor and into a downtown loft above an abandoned warehouse. Money from a generous trust fund set up years before by Haley's Circus enabled Dick to buy the building and he has turned its top two floors into his own high-tech urban headquarters. Though Dick's fortune is small compared to the Wayne billions, he's got enough cash to keep his crime fighting alter-ego in state of the art weaponry for years. Though Dick still teams up with his one-time mentor, he often finds that despite their many differences, they are very much alike.

Even after Nightwing established himself in Gotham City as a powerful and mysterious force for good, he further showed his independence by moving to Gotham's sister city, Bludhaven.

Retrieved from "https://dc.fandom.com/wiki/Richard_Grayson_(DCAU)?oldid=2821571"
Community content is available under CC-BY-SA unless otherwise noted.