If you're as terrific as you are as a kid—I pity the criminals when you're a grown man.

Dick Grayson was Robin, the sidekick and ward of Batman. Starting out as the Boy Wonder, he used the moniker until well into adulthood, serving in the Justice Society of America and All-Star Squadron alongside Batman's daughter Huntress. In his civilian life, he became a senior partner for Cranston, Grayson and Wayne.

Richard "Dick" Grayson was born to circus aerialists John and Mary Grayson in 1928.[1]. Dick Grayson joined his parents in their trapeze act, the Flying Graysons, which was part of the small traveling Haly's Circus. Under pressure to pay protection money to a local mobster, Tony Zucco, the circus owner refused to pay. Enraged, Zucco decided to intimidate the circus owners by killing their most successful act, the Flying Graysons. Zucco had the trapeze and safety nets cut which killed John and Mary Grayson.

Millionaire playboy Bruce Wayne was in the audience and watched the Grayson's death happen. Some later versions state Wayne was investigating Zucco activities at the circus but was unaware of the extent Zucco was already involved.[citation needed]

Grayson blamed the deaths on Zucco from conversations he overheard. Wayne recognized a similar tragedy in his own earlier life and decided to take Grayson in. Deciding to channel Grayson's rage and grief into action, and partially protect Grayson from Zucco, Wayne began training Grayson in further more extensive acrobats and fighting techniques. When Wayne felt Grayson was ready to use his skills, Wayne gave him the costumed identity of Robin, the Boy Wonder.[5]

However, Bruce never had the intention of allowing Dick to become a crime-fighter. Due to Dick's insistence, Bruce trained him in criminology and investigation. The final test came when the Gotham Police couldn't capture some criminals and they had to assist them. Unfortunately, Batman was captured by the criminals and Robin was forced to work alone to rescue Batman. After this impressive feat, Batman allowed Dick to become his permanent sidekick.[6]

The third case that the Dynamic Duo had to solve was the Opium trade in Chinatown. After Batman was informed by Wong, Robin stayed at Wayne Manor, but he started working on the case on his own and arrived at the criminals' lair, where he fought them until Batman arrived and together they eliminated the criminals.[7]

Batman and Robin solved a murder mystery perpetrated by Clayface[8] and soon they faced a new wave of unusual criminals like the Joker, Cat-Woman and a fugitive Hugo Strange.[9][10]

After the dynamic duo saved New York's World Fair,[11] Robin was enlisted on a private school to solve a murder mystery and capture an insane fugitive.[12] After this, Batman and Robin captured the Painter of Death,[13] they cleaned a whole town from corporate gangsters[14] and stopped other criminals including Catwoman,[15] Joker [16][17] Hugo Strange[18] and Clayface once again.[19] 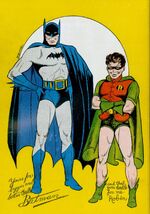 On their missions together, Batman would track down all sorts of criminals and Robin provided the help Batman needed.[20][21] When Joker made a third comeback, it was Robin who defeated the clown, saving Batman from a certain death, but shortly after, Robin was victim of a vicious attack that left him in need of surgery to recover.[22] After this, Batman and Robin solved the mystery murder of Erik Dorne at the hands of a witch,[23] and stopped various regular criminals.[24][25][26][27]

While helping Batman on a mission, Robin was captured and used as a hostage to lure Batman into a trap. However, they managed to overcome the odds and captured the criminals.[28] After this, Batman and Robin encountered a new villain who terrorized Gotham City. The Scarecrow used fear as his modus operandi and after a long investigation and various encounters, the dynamic duo was finally able to capture him and send him to jail.[29] Batman and Robin stopped the threat of a stone giant,[30] encountered the Joker once more and they solved more cases before Bruce Wayne was framed for murder. With Robin's help, Bruce managed to break out of prison and acting as Batman, he cleared Bruce's name as well as his own. As a result, Commissioner Gordon named Batman an honorary member of the GCPD.[31]

Not long after, Batman and Robin confronted a new criminal, The Penguin but failed to capture him.[32] Robin aided Batman on a mission while infiltrated in prison, they confronted the deranged Professor Radium, solved some superstition mystery murders and finally captured the Joker after a chase across the country.[33] Then, Batman and Robin stopped a criminal gang in a west town,[34] stopped Penguin's second criminal racket[35] and arrested Joker once more.[36] That year, Robin spent his first Christmas with Batman and after bringing joy to some orphan kids, they spend the Eve with Commissioner Gordon and Linda Page.[37]

After this, Batman and Robin stopped three smart and dangerous criminals,[38] uncovered the mystery behind the crime holiday scheme[39] and captured a fugitive Joker.[40] For Dick's ninth Birthday, Bruce gave him his own Batplane and later, they stopped Catwoman, saved a kid from a band of thieves and restored peace in Sunshine City.[41]

Robin was almost murdered by the Joker, but Batman managed to save him in the nick of time. After this, Robin captured Penguin and his gang after Batman was shot and left out of action for a few days.[42] Soon, Batman and Robin confronted a new criminal, the former D.A. Harvey Kent, who became the criminal Two-Face after an unfortunate accident.[43]

Certain day, Batman decided to work alone and forced Dick out of the role of Robin. However, this turned out to be a ruse to protect Dick's life. After the misunderstanding was cleared, Batman and Robin stopped the Joker once again.[44] After this, Batman and Robin stopped some Nazi spies from sabotaging America's war plans and shortly after, the dynamic duo finally captured Penguin, who was sentenced to death.[45] A while later, Batman and Robin were challenged by the Joker, who went on a daily crime spree until the dynamic duo finally deduced his plans and captured him.[46]

Later, Batman and Robin finally captured the mistress of crime, Catwoman after she started a crime spree in Gotham by impersonating other people.[47] The next notorious criminals that the dynamic duo encountered were Tweedledum and Tweedledee. These twin-looking cousins started a crime spree in Gotham after which Batman and Robin located their hideout and stopped them.[48]

After capturing the Joker, who was suffering from temporal amnesia, Bruce Wayne and Dick Grayson were introduced to Alfred Beagle, who arrived at Wayne Manor with the purpose of becoming their butler. At first, Bruce and Dick weren't going to let Alfred stay, but after the stout fellow proved to be useful, both by helping the dynamic duo capture some criminals and also by discovering Batman and Robin's secret identities, Alfred became Bruce Wayne's butler and Batman's assistant.[49]

Later, Batman and Robin confronted the newest criminal in town The Crime Doctor sending him to prison.[50] However, the doctor escaped and started a new crime spree. During a fight with the doctor's gang, Robin was shot and subsequently saved by the doctor. After this, the doctor was betrayed and killed by one of his own men.[51]

After this, Dick was briefly taken away from Bruce by his uncle George (who had been living in Europe), who claimed Dick's custody in a court of law -- and then attempted to extort $1,000,000 from Wayne to return Dick to his custody. However, George's connections with criminals eventually forced him (and his wife Clara) to leave Gotham in disgrace, returning Dick to Bruce Wayne's custody without payment.[4]

Later, Batman and Robin met Professor Carter Nichols who was a time travelling expert and allowed them to travel in time with their minds.[52] Following the discovery of ancient Indian artifacts in the Batcave, Batman and Robin travelled back in time 300 years into the past, with help from Professor Nichols. There they learned that the Batcave was previously inhabited by Jeremy Coe, an Indian spy and helped him escape the Indians and report back to his superiors at Fort George before returning to their own time.[53]

As Grayson became older, he faced his own villains including No-Face and others including several of the earlier Batman rogues.[54] Grayson would continue as Batman's partner until Wayne retired from the role despite gaps such as when Grayson left for college.

Starting in the 1960s, Robin became a member of the Justice Society of America; Batman entered in a state of semi-retirement of his heroic career, preferring to fight crime as Police Commissioner of Gotham City. Now an adult, Robin tried to keep up to the steps of his mentor and prove himself worth of the JSA.

As Dick Grayson, he became a full partner in the law firm of Cranston and Grayson (later Cranston, Grayson and Wayne upon Bruce's daughter Helena joining). It was as the prominent lawyer that Grayson became elected to serve as Ambassador for the United States to South Africa in the late 1970s. Grayson would continue to be active as Robin for most of the intervening years. After the death of Bruce Wayne, Grayson reconsiders his earlier decision and thinks to re-adopt the Batman role but Helena convinces him not to do so.[55]

Grayson would assume the identity of Batman in one known occasion against the Joker, who resumed his rampage upon hearing of the death of Batman (Wayne). Grayson assumed the role of Batman without indicating that he was not the original.[56]

After that Joker case, Grayson completely retired from the Batman role, preferring to remain Robin. Grayson's original feelings against successors to the Batman role would resurface when the Batman of Earth-One came to Earth-Two and Grayson would express his feelings of failing in the role of successor and against anyone else being Batman for the first time.[57] But Grayson later came to accept the Earth-One Batman as his own person rather than as an imitation of his long-dead friend.

On many occasions, Grayson performed as the senior partner of the new "Dynamic Duo" which consisted of himself and Wayne's daughter Helena in her role as the Huntress, as well as alone. He would continue on as Robin until the Crisis on Infinite Earths came to Earth-Two.

Robin, in his role as attorney Dick Grayson, prosecuted a case against the Justice Society of America, based on a diary written by Batman prior to his demise indicating that the team were collaborators with the Nazi regime. During the legal proceedings, his opponent in the court room was Helena, who defended the team. Grayson later learned that the diary pointed towards a plot by the time traveling villain Per Degaton, and thwarted him prior to Degaton's suicide.[58]

Robin and the Huntress both took part in several battles of the Crisis on Infinite Earths and joined the battle at the "Dawn of Time" against the Anti-Monitor and were thus saved from annihilation when history of the multiverse was destroyed, leaving only the singular New Earth and their own history and Huntress under rubble from a collapsed building. Robin went to her rescue while Kole of the Teen Titans erected a crystal dome to protect them. The effort failed and all three were reduced to ash. The Batman of Earth-One, Mary Marvel, and Jason Todd found the remains. Robin and the Huntress were buried at Valhalla Cemetery.[1]

Retrieved from "https://dc.fandom.com/wiki/Richard_Grayson_(Earth-Two)?oldid=2802793"
Community content is available under CC-BY-SA unless otherwise noted.