Richard Grayson was an orphan in Gotham City and later taken in by Bruce Wayne.

Dickie was a member of a group of orphans called Outsiders alongside Little Timmy and Jason Todd. They were made to rob people of Gotham City by Big Bill Dust. One night while robbing an old couple, Tim suggested they leave as it was getting late Bill however showed up and warned them against going back. Timmy stated he was just afraid after what had happened to Johnny Gobs, but Jason assured it was just a fake story to scare children.

Batman however soon showed up and refrained from assaulting the kids, even after they tried attacking him, and broke Bill's knee to assure them he won't come after them again, before telling them to find Sister Leslie who'll shelter them. After hearing the scream of a woman, he told them to get off the streets. Jason later tried pickpocketing Alfred Pennyworth, but was caught. Dickie chastized him for stealing during the funeral of Sister Leslie, who had always sheltered them and was against stealing, though Jason stated he was hungry. Alfred upon learning they were just a bunch of poor orphans let them go and handed them a card to contact him whenever he needed a job done.

When Batman was imprisoned in Blackgate Penitentiary, Alfred had them deliver the Batcycle, which was hidden in a crate, to an alley. Jason suggested stealing it, however the others rejected such a proposition. Dickie agreed and told Jason to push the crate. Batman soon showed up and took the crate, before praising them for their job and telling them to go. After his fight with Jack the Ripper, Alfred and the kids arrived at the Gotham World Fair in a horse carriage to rescue him and Selina Kyle. Alfred decided to take the three kids in and have Bruce take over their custody. Batman and Selina watched sadly as the world fair exploded, but Dickie stated that it was pretentious and they should build something new and better. 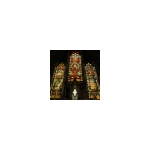