I haven't been okay since I was eight years old, Babs, you know that.

In a possible future, Dick Grayson was among the allies Bruce Wayne had pushed away.

Severely injured by The Joker

When The Joker kidnapped Alfred Pennyworth, Nightwing teamed-up with his estranged mentor to rescue him. Unfortunately, Bruce hadn't worked with a partner in a while and inadvertently let Nightwing get shot. He prevented Dick from bleeding out, removed his costume, and called emergency services, but even after he rescued Alfred, he never visited Dick in the hospital. Once he was released from the hospital, Dick retired from superheroics and became an acrobatics instructor. 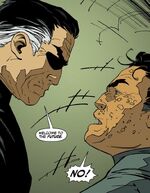 Dick was a suspect in the Hush killing because of his knowledge of the Batman Family. When he was visited by the new Batman, he gave him proof of his alibis and warned him about working with Bruce.[1] Sensing Terry needed help with Hush, Dick turned on his Gotham City Police Department radio. He helped rescue Dr. Nora Reid from Cadmus Labs operatives. He escorted her to GCPD Headquarters, where she revealed that Hush was a Cadmus clone of Grayson from genetic material taken during his time in hospital.[2] He reluctantly returned to the Batcave and teamed-up with Batman, Bruce, and Catwoman to defeat the faux Grayson. The clone seemingly died in an explosion, but Terry wasn't convinced he was gone for good. Afterwards, Bruce attempted to mend his relationship with Dick, only for Dick to coldly exit the call.[3]

Retrieved from "https://dc.fandom.com/wiki/Richard_Grayson_(Hush_Beyond)?oldid=2781762"
Community content is available under CC-BY-SA unless otherwise noted.