Dick Grayson was the former superhero Nightwing before becoming the leader of the Crusaders division.

Now he hunts metahumans with extreme prejudice in an effort to keep the public safe from their powers.

After the death of his parents, acrobat Dick Grayson was taken in by Batman and invited to join him as his sidekick. Grayson accepted and was trained by Batman to fight crime, eventually taking to the streets as the first vigilante "Robin".

Some time into his career, Robin met the sidekicks of other fellow heroes and, after encountering the alien princess Starfire, they all formed the Teen Titans. As he grew older, Grayson outgrew the name Robin and graduated to a new persona - "Nightwing" - and continued to work closely with the Titans. [1] 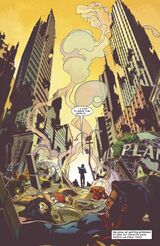 Aftermath of the Battle of Metropolis

In the year 2028, all-out war between heroes and villains had broken out in the streets of Metropolis. For days, good and evil raged in the city, with countless deaths and destruction caused by the conflict. Following the death of his mentor and adoptive foster father Batman, Dick Grayson, still active as the hero Nightwing, activated a device in the war-torn streets of Metropolis that nullified the super-human powers of most of the world, believing it was the best cause of action to save humanity from the dangers of those with powers. [2]

Sometime afterwards, Dick began a relationship with his former Teen Titans member Starfire and, even though Starfire's powers had been nullified by Nightwing's device, they fell in love and had a son named Jake. As time went on and Grayson was thrust more into the public eye as humanity's savior from superpowers, Starfire progressively fell out of love with Dick and resented his cause. One day, after Dick had been chosen to lead the new Crusaders division to hunt metahumans, Starfire left Dick without saying a word, forcing him to raise their son alone in Wayne Manor. [1]

In the year 2040, having come out publicly as Nightwing, Dick Grayson now worked as the leader of the Crusaders division in Gotham City, a police force that specialized in taking down rogue super-humans using a power-dampening serum. His status as the former hero who saved the world from super-powers made Dick a sort of celebrity and icon to the public.

However, Dick's world became complicated again when his son Jake, now in junior high, began to develop powers of his own. [2] Attempting to control the situation before his division knew what was going on, Grayson and his son were prematurely arrested by Kate Kane, formerly the hero Batwoman, who held a grudge against Nightwing for becoming the head of the Crusaders over her. [3] Escaping captivity, Grayson returned to the Batcave and suited up one last time as Nightwing in order to track down and free his son from the Crusaders who wanted to cryogenically freeze him.

Now a wanted man, Grayson was hunted by Green Lantern, an agent of the government, but was successfully saved by the Titans, a rebel operation of some of Grayson's former Teen Titans comrades that had been opposing Grayson's Crusaders for years. [4] Reconnecting with some of his old friends, despite their huge political differences, Grayson begrudgingly agreed to work with the Titans in order to better find and save his son. [1]

Retrieved from "https://dc.fandom.com/wiki/Richard_Grayson_(The_New_Order)?oldid=2723826"
Community content is available under CC-BY-SA unless otherwise noted.