The costumed lunatics give Batman his meaning... they're the only family he ever truly loved... so I'm going to make Batman an orphan... again.

A clone of Dick Grayson became the second Hush, fighting the second Batman.

Obsessed with keeping the legacy of Batman alive, Director Waller tasked Cadmus Labs with creating a clone of his original protege, Dick Grayson. The clone had a warped hatred for Bruce Wayne for never giving him his mantle and believed the only way to end crime was through bloodshed.[1]

During an annual physical, the clone was able to break free and escape the facility. When he learned of the new Batman, he was enraged and considered him a "pretender." He started killing Batman Villains and embraced the nickname the media gave him: Hush.[2] When he was going to murder Calendar Man, he was suprised to find that Batman had beaten him there.[3] Nonetheless, Hush killed his victim, but not before revealing he knew the secrets of the "old" Batman Family. 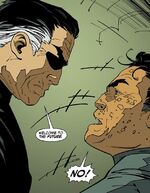 He later hired Catwoman to plant a tracker on Batman, but tried to kill her when she returned for her payment.[4] She was saved by a Bat-Wraith, but it malfunctioned during the ensuring fight and Hush was able to swipe its communications array. Hush then tracked down Batman and beat him within an inch of his life and revealed his "true" identity.[5] He left and murdered Mad Stan, stole his stash of explosives, and took control of the Bat-Wraiths. He messaged the Batcave to gloat of his plan to destroy Neo-Gotham.[6] Batman, Catwoman, and the real Dick Grayson teamed-up and were able to stop him, with Hush seemingly dying in an explosion.[7]

Retrieved from "https://dc.fandom.com/wiki/Richard_Grayson_clone_(Hush_Beyond)?oldid=2802625"
Community content is available under CC-BY-SA unless otherwise noted.